With the return of Wiskus, Gophers men’s gymnastics dominates Penn State to win first meet of the season

Shane Wiskus returned, and so did the Gophers men’s gymnastics team’s winning ways against Penn State. 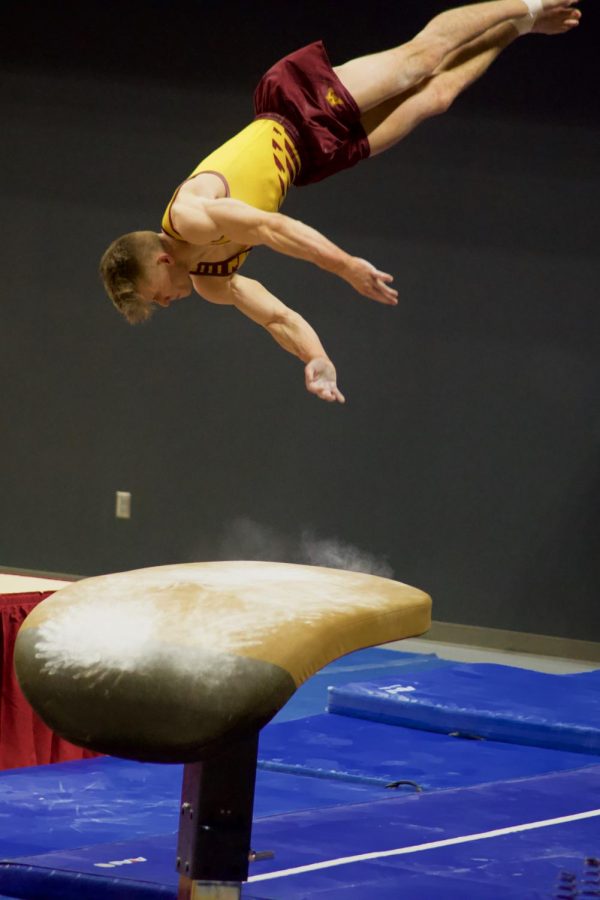 Senior Gymnast Shane Wiskus does his routine on the vault at Maturi Pavilion on Saturday, March 6. The Gophers won against Penn State.

“I’m really excited about the performance of our guys tonight,” head coach Mike Burns said. “Lots of positive energy out there, and that drives a lot of good things. They put on a show.”

Led by the return of senior Shane Wiskus, the Gophers scored their highest event total on the year and won four out of six event titles, the highest amount they have won this season.

“I knew we were a four-hundred plus team,” Wiskus said. “But obviously, I’m still looking at where we can improve for Big Tens [championships] because I’m still not finished yet. I had mistakes myself, fell on the vault and pommel horse. Two events where we could have made up a lot of extra points.”

Wiskus made his return to the Gophers for senior night and put on a show. He scored an all-around total of 84.050 to earn the meet’s all-around title, which ranks as the third-highest all-around score in the nation this season.

“To go out and finish the way we finished, it meant the world to me,” Wiskus said. “The energy was high. I was screaming after every routine, screaming for all the guys. It felt really great to be back.”

The Gophers also saw career-high performances from six of their gymnasts.

“It was a great effort. We knocked off a number five team and showed the rest of the country what we are capable of,” Burns said. “Penn State’s a solid program. To have them here and be able to knock them off was pretty rewarding.”

Led by Wiskus’ magnificent performance that earned him 14.800 and the individual event title, the Gophers’ floor team started off the meet with its second-highest team score of the entire event to secure the team title.

Junior Danny Yoon had a career-high performance, earning a score of 13.650.

Highlighted by a career-high performance from Moran that earned him 13.350 and second place, the Gophers pommel horse team scored a total of 62.400.

Led by Wiskus and Dee, the Gophers’ still rings team scored a total of 67.850.

The Gophers suffered their second event loss of the afternoon on the vault after scoring a team total of 69.850, which was their highest team score out of all six events.

Junior Ben Eyles highlighted the vault by scoring 14.300, which earned him the individual event title.

Kasiski scored 14.200 to earn him a fourth-place finish.

Led by another beautiful performance from Wiskus, the Gophers’ parallel bars team scored a total of 68.600 and saw career-high performances from all the other Gophers competing on the parallel bars.

Wiskus scored 14.750, the highest score on the parallel bars in the nation, and earned the individual event title.

To finish out the meet, the Gophers’ high bar team had four out of their five gymnasts stick their landing, earning them their fourth team event title of the afternoon.

The Gophers will travel on the road to No. 2 Michigan next week, seeking their second win of the season on March 14 at noon.