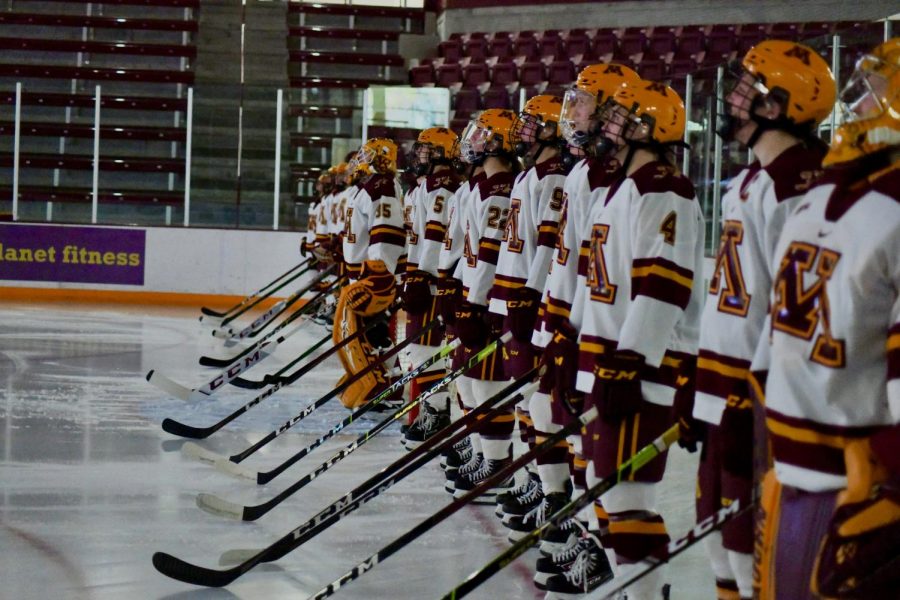 University of Minnesota women’s hockey team lines up before their game against Ohio State in Ridder Arena on Saturday, Nov. 21. The Gophers won in a shut out with an ending score of 4-0.

The Minnesota Gophers women’s hockey team will miss the NCAA tournament for the first time since the 2006-07 season. It failed to be selected by the tournament committee as one of the top-8 teams in the country to play further into the postseason.

This denial is no short of a shock; the Gophers seemed like a lock in the tournament even though they were a No. 4 seed in the WCHA tournament and lost the opening semifinal match against Wisconsin 5-3.

“Extremely high disappointment level tonight,” head coach Brad Frost said. “We were not expecting to see those seedings and have a room full of girls and staff devastated to hear the news.”

The committee did not reward The Gophers for playing three more conference games than the three teams admitted into the tournament. Even if Wisconsin did not win the WCHA tournament, its record was still strong enough to get an at-large bid. Ohio State also has priority over the Gophers since the Buckeyes had a 4-2 record versus Minnesota this season.

That the University of Minnesota Duluth secured a bid over the Gophers was a head-scratcher, as the Gophers went 2-0 against the Bulldogs this season. The Bulldogs split their lone series with Wisconsin and Ohio State and finished 11-5 in the conference.

In their most recent contest, the Bulldogs lost to Ohio State 7-2 in the WCHA semifinals.

“You would think head-to-head would be the first thing the committee looks at,” Frost said concerning UMD’s selection over the Gophers. “There’s no shying away that we had eight losses, but all of those losses were to two teams consistently in the top-3 in the country… coaches polls have had us as high as [No.] 1 and as low as [No.] 4 the entire season.”

Before the selection show, Frost received a text from Colgate’s head coach Greg Fargo saying “see you next week,” with both coaches expecting a first-round No. 4 vs. No. 5 matchup.

Frost thought four at-large teams were deserving to get in: Minnesota, Boston College, UMD and Penn State, predicting only one of those schools not to make the cut instead of two (Minnesota and Penn State).

Four out of five seniors on Minnesota’s 2020-21 will most likely return next year, with Grace Zumwinkle possibly being the lone senior to not return due to USA Olympic team commitments, according to Frost.