A late-game push gave Gophers fans hope, but Ohio State held on to crush the comeback. 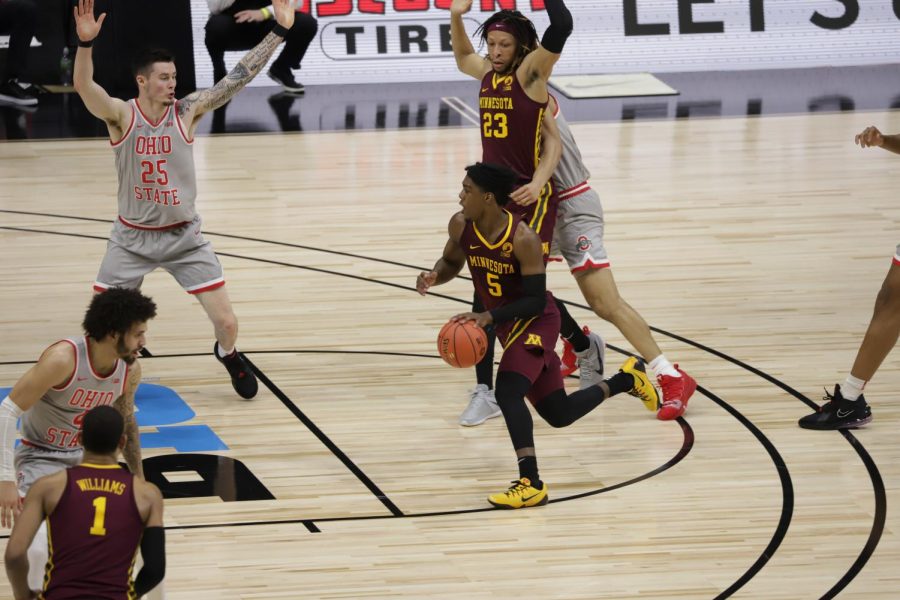 The Gophers played Ohio State at Lucas Oil Stadium in Indianapolis, Indiana on Thursday, March 11, 2021. The Gophers lost to the Buckeyes 75-79.

The Gophers men’s basketball team saw its season come to an end Thursday as Ohio State held on for a 79-75 win. The guards struggled to make their shots, and the Buckeyes dominated inside. The Gophers made things interesting in the final two minutes but came up just short.

Down 12 points with 2:12 left, the Gophers showed they weren’t ready for the season to end. A team that has struggled of late showed heart in a time where all seemed lost.

Minnesota was hitting shots and getting stops to get the game close. Minnesota went on a 18-9 run that included getting the game within one. Eleven of the 18 points came from redshirt junior guard Marcus Carr.

“[Carr] earned every point that he had. It was just grit, it was toughness, it was will — he has that. He’s never had a bad day, never felt sorry for himself. He came to practice, came to work every day so his future is very bright,” Gophers’ head coach Richard Pitino said.

The second half, as a whole, was a much different story for Carr, sophomore Tre’ Williams and freshman Jamal Mashburn Jr. as they combined for 36 points on 14-of-29 shooting. The late push came up just short as Minnesota failed to erase the 14-point deficit and didn’t lead the game once.

“As we [left] the court, as we got in the locker room after the game, we just tried to keep our heads up high. We know we fought back and gave our all, so we knew we gave each other our best at the end to fight back and make the game close,” redshirt senior Eric Curry said.

The Gopher starting guards didn’t have a first-half they’ll want to remember. Carr, Williams and Mashburn combined to shoot 6-of-30 from the field, all three responsible for making two buckets each. Carr was able to lead the team with eight points going into the break.

Minnesota had chances to erase its slow start as Ohio State didn’t have its best performance. Unfortunately, E.J. Liddell and the Buckeyes dominated the play inside, and the Gophers continued to lack in their shooting from deep. The Gophers shot 8-of-32 from deep and the Buckeyes won the paint game 44-34.

The Gophers got away with a poor offensive performance in their game against Northwestern, but against a better team, it doesn’t work. The Gophers started the game going almost seven minutes without scoring while shooting 0-of-8, as the Buckeyes got out to a 13-0 lead. The cold start continued and Minnesota shot 3-of-20 from the floor, including 0-of-8 from deep.

The game should have been a lot more out of reach, but the Buckeyes ran into their own stalemate. They went almost six minutes without making a field goal after Minnesota finally was able to get on the board.

That was in large part because the Buckeyes got a little shaky on offense and were hurting themselves by turning the ball over. However, they dominated the paint game early, and once again, the Gophers missed junior Liam Robbins’ presence inside. In the first half, Ohio State had a 26-12 edge on points in the paint.

Still in the game, the Gophers decided to wake up and give Ohio State a bit of a worry as Minnesota went on a 9-3 run to get the game to within four. A pair of threes from Carr and Mashburn got the energy going and Minnesota was right back in the game.

Minnesota was only able to hold that small deficit momentarily as Ohio State went on an 11-2 run to get the game back into double-digits. They finished off the half on a 15-7 run, which included the Buckeyes hitting on their final seven shots to take a 12-point lead into the break.

The Gophers were able to keep the game close and also get the game within a couple possessions a few times, but were unable to complete the comeback.

The second half looked a lot better for the Gophers, but they were unable to keep their season alive. The three-point shooting was better, but it still has been hurting Minnesota as it continued to get three-point happy. After shooting 2-of-15 from deep in the first, the Gophers shot 6-of-17 in the second.

The three starting guards also picked up their play to try and get them back in the game. Though Carr struggled again shooting, Mashburn took over early in the second half and scored seven straight points.

The Gophers’ next three possessions included three straight-made threes, as their deficit was down to just four points. With their season on the line, the Gophers were desperate in the final two and a half minutes and made things very interesting.

Carr finished with a game-high 24 points, but shot just 7-of-24, Mashburn scored 18 and Williams contributed 11. Carr gave a valiant effort late in the game and looked defeated and downhearted after giving everything he could this season.

A team that has struggled to shoot all season gave an extra effort Thursday on the glass and in transition. Minnesota grabbed 16 offensive rebounds that turned into 20 points and forced 15 turnovers that turned into 19 points.

The fight was there, and the team gave Pitino all they had up until the final buzzer. It seems as though Pitino’s time in Minnesota has come to an end, and a tough end to say the least.

After an incredible start to the season, Minnesota lost eight of their last nine games, and a once top-20 team, it no longer has a shot at a tournament bid.

As Curry looks back at his career with Minnesota, he is hopeful for what this team will achieve. Curry has given a lot to the program and his time has come to an end.

“I hope one day Minnesota is considered one of those top programs in the country, like the Michigans and Michigan States in the league. I just hope we get to take a ride and keep riding. Be the best they can be,” Curry said.