Protesters expressed concerns about jurors who being dismissed while jurors with ties to police were seated. 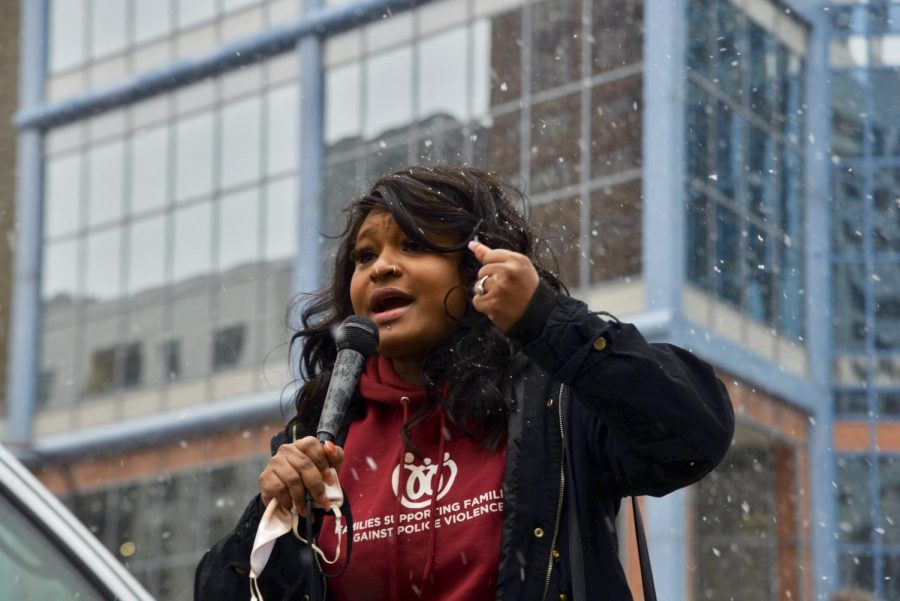 Dozens of people braved the cold and snow outside of the Hennepin County Government Center on Monday to protest what they saw as unfair jury selection in the trial of former police officer Derek Chauvin.

Two more jurors were seated as the protest carried on, making nine out of 14 needed. Activists argued the process has been riddled with racism and the defense team has unfairly struck potential jurors of color.

Protesters expressed frustration at the currently seated jurors, particularly jurors who have ties to police officers. Juror nine, a mixed-race woman, has an uncle who is a police officer near Brainerd, and juror 19, a white man, has a distant friend who is an officer. Juror 52, a Black man who was seated on Monday, said he goes to the gym with Minneapolis officers who he called “great guys.”

Several speakers said they thought it was important to have “peers of George Floyd” on the jury to have a fair trial; more than half of the current jury is white.

“What we will find out from this trial is if the system or we have any humanity left in us. We’re going to find out if we actually value the life of the lives of human beings,” Jaylani Hussein, director of the Minnesota Council on American-Islamic Relations, said at the rally.

Communities United Against Police Brutality and five other activist groups hosted the event, and protesters marched a short route around the Government Center.

Nadia Shaarawi, a fourth-year University of Minnesota student and organizer with the Students for a Democratic Society, said community vigilance early in the trial placed important pressure on those in the courtroom.

Many of the protesters were also concerned with how the defense struck potential jurors of color.

Defense attorney Eric Nelson tried to strike juror one, a Hispanic woman, saying she could not serve on the jury because she had some difficulties understanding English. Judge Peter Cahill denied it, and the defense eventually struck her because she wrote “unjust death of George Floyd” on her questionnaire.

“I just felt that the way that she was treated seemed to be discriminatory, in a sense of the defense acting as if the woman was not sophisticated enough to understand the proceedings,” said Nekima Levy Armstrong, a civil rights attorney and activist, at a webinar hosted by the Legal Rights Center Monday evening.

Andrew Gordon, deputy director for community legal services at the Legal Rights Center, said the jury system is flawed in how it approaches fairness. The jury questionnaire asks about experiences “that one may have because of their ethnicity, or because of their race,” which can be grounds for a for-cause dismissal, Gordon said at the webinar.

“So you have a bad experience with law enforcement, largely because you’re Black, and therefore [they’re] going to kick you off of this jury,” Gordon said.

After Friday’s announcement that the city of Minneapolis paid $27 million to the Floyd family in a civil suit settlement, Cahill said he will call seven seated jurors back to be re-questioned about the settlement, and if it changed their ability to presume that Chauvin is innocent.

Hundreds of people demonstrated outside the Government Center on the first day of the trial, but turnout declined by the second week. As the trial moves forward, activist Kaia Hirt with Good Trouble for Justice said she is worried that fewer people will attend protests in the coming weeks.

“And that’s the fear and the disappointment of BIPOC people because that has been the pattern throughout our country’s history,” Hirt said.