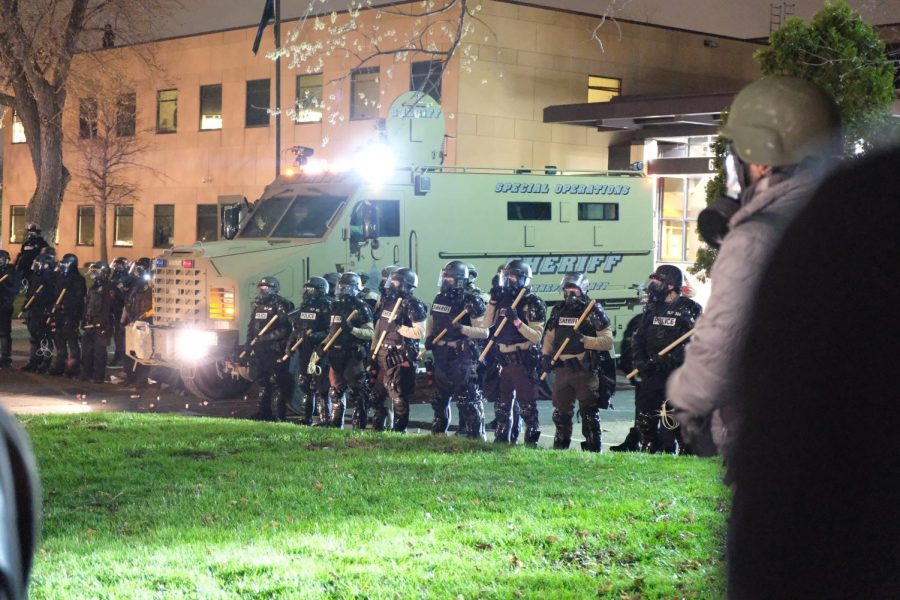 After a Brooklyn Center police officer shot and killed 20-year-old Daunte Wright, officers lined up in front of the police department and shot tear gas into crowds of protesters.

Hennepin, Ramsey, Anoka and Dakota counties will be under curfew from 7 p.m. Monday evening to 6 a.m. Tuesday morning.

Minnesota Gov. Tim Walz made the announcement at a press conference Monday afternoon. There are exemptions, including for essential workers, he said.

The curfew comes after Brooklyn Center police killed Daunte Wright, a 20-year-old Black man, during a traffic stop Sunday. Brooklyn Center officials released body camera footage of the incident at a press conference Monday. The footage showed Brooklyn Center police handcuffing Wright, who then tried to reenter the driver’s seat of the vehicle. A struggle ensued, and a police officer shot Wright.

The vehicle drove away “several blocks” before crashing into another vehicle, according to a press release from the Brooklyn Center Police Department.

Brooklyn Center Police Chief Tim Gannon said that the officer “accidentally” discharged her gun and intended to fire her Taser. The officer can be heard yelling “Taser, taser, taser” before shooting Wright.

Protesters and mourners gathered at the scene in Brooklyn Center Monday evening, according to news reports. At nightfall, protesters confronted a line of police wearing riot gear outside the Brooklyn Center Police Department. Police fired tear gas and flash-bang grenades in an attempt to clear the crowd, MPR News reported.

Apartments across the street from the police department were in the line of fire as police deployed crowd-dispersal munitions, footage captured by Unicorn Riot showed.

Officials cited looting that occurred at a Brooklyn Center shopping center during the protests as a reason for the curfew. John Harrington, commissioner of the Minnesota Department of Public Safety, said that “within hours” of the looting, several law enforcement agencies were mobilized, and that “hundreds and hundreds of uniformed individuals” will be patrolling Tuesday tonight.

Besides Brooklyn Center police, multiple other agencies were deployed — including the University of Minnesota Police Department, State Patrol and several members of the Minnesota National Guard.

For those who violate the curfew “to exploit these tragedies for destruction or personal gain, you can rest assured that the largest police presence in Minnesota history and coordination will be prepared. You will be arrested. You will be charged, and there will be consequences for those actions,” Walz said.

The shooting comes at a tense time for a community already grieving the police killing of George Floyd. Protesters are intensifying calls against police brutality, as the jury hears from witnesses during the trial of former police officer Derek Chauvin.

A vigil organized by Wright’s family was scheduled for 7 p.m. on Tuesday in Brooklyn Center. It has since been rescheduled to 6 p.m.

Correction: A previous version of this story misstated the day police shot and killed Daunte Wright.