Minnesota didn’t find any luck in Indiana as it lost its 10th straight game while allowing 39 runs in three games. 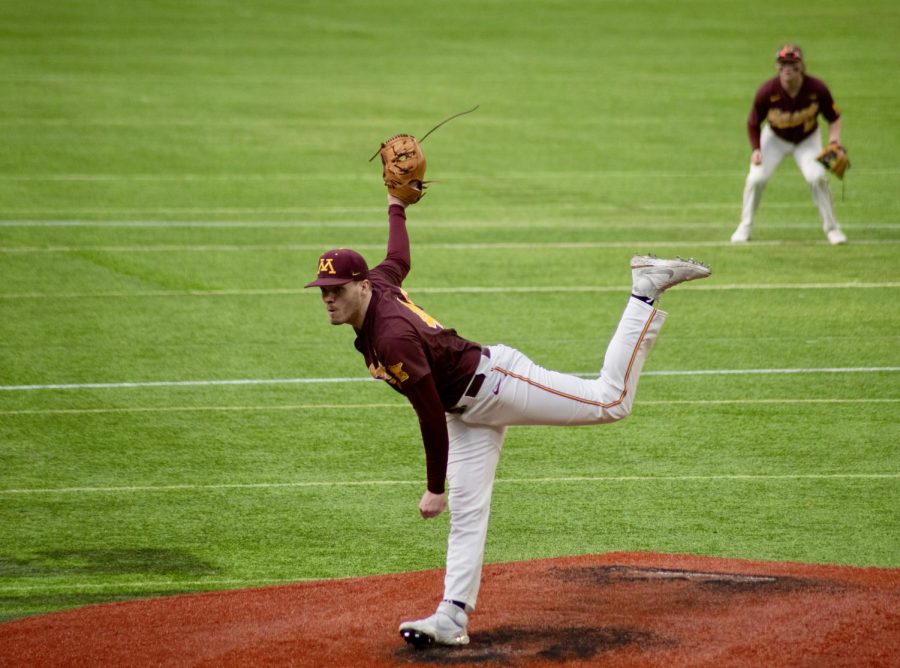 The Gophers baseball team dropped all three games in its weekend series against Indiana. A dropped doubleheader followed by a 23-1 blowout led to another winless series as Minnesota dropped to 4-23 on the season.

Things got ugly quickly for Minnesota in the first game of the series as the Gophers found themselves in a 3-0 hole after just two innings. That set the tone for a weekend where the Gophers didn’t lead once and tied for just three innings.

The opening game was the best outing Minnesota had on the offensive end, as it plated three runs in the game courtesy of the long ball. Senior Ronald Sweeny went yard with a runner on base to cut the lead to 3-2 in the top of the fourth, which marked the closest the Gophers would be the rest of the weekend. Minnesota fell 9-3 in the first of a doubleheader Friday.

After Indiana extended its lead, senior Easton Bertrand hit a solo shot in the seventh, his first of two on the day. Bertrand was later responsible for the lone run in the second game of the doubleheader with another solo shot.

That was all of the Gophers’ offensive production in Friday’s doubleheader, which didn’t line up with how they played on defense.

Indiana wasn’t batting the ball around the diamond in the first game, but Minnesota pitchers were allowing the Hoosiers free passes at the plate. Gophers pitchers allowed 12 walks and two hits by pitch compared to just nine hits allowed. Along with two errors in the field, Indiana plated nine runs in the series opener.

The second of Friday’s doubleheader wasn’t much different for Minnesota, which saw a 6-0 deficit after the first four innings. On 10 hits, Indiana was able to score seven runs en route to a 7-1 victory in Bloomington, Indiana.

Outside of Bertrand’s home run, the Gophers weren’t able to string together too many hits. Minnesota had seven total hits, but other than on the home run, no one could cross the plate.

The series finale was over as quickly as it started. Minnesota used five pitchers, all of which surrendered three runs or more. Indiana was hitting the ball more, but Gophers’ pitchers continued to help out by allowing free bases.

On top of the 17 hits, the Hoosiers drew 11 walks and were hit by the pitch four times. Indiana jumped out to a 13-0 lead after just two innings, and the blowout didn’t stop there. The Gophers were able to grab one back in the sixth, but that just led to an Indiana answer that saw 10 more runs cross the plate in a 23-1 blowout over Minnesota.

In the bottom of the sixth and seventh, the Hoosiers plated five in each inning to extend their lead to 23-1. A mix of pitching struggles and a lack of offense led to a long weekend for Minnesota. The Gophers put up just five runs total and couldn’t match Indiana’s firepower.

Minnesota is back in action next weekend when it travels to face Maryland in a three-game series.