The market showcased local artists producing geek-themed goods and created a sense of community among those with niche shared interests. 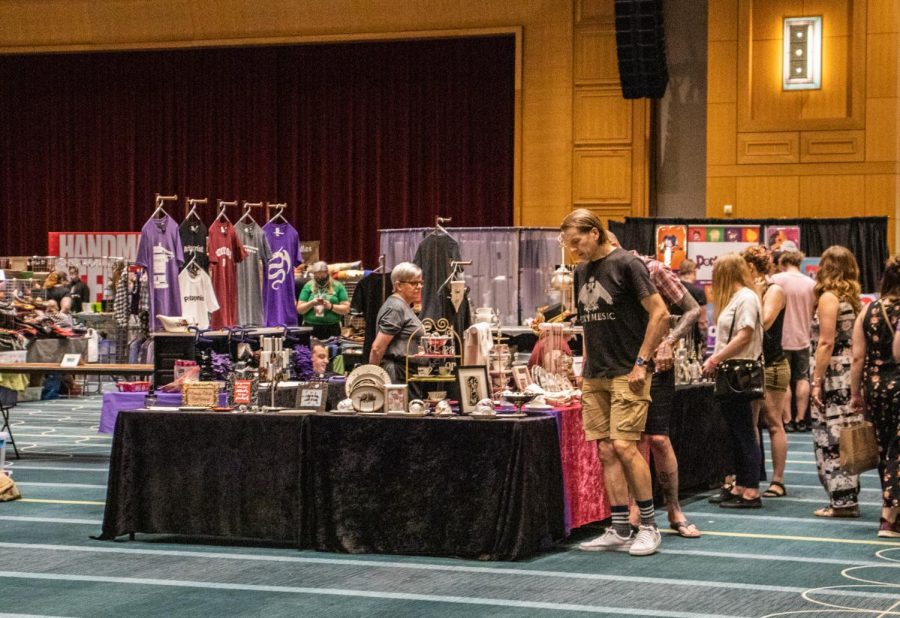 Patrons look at handmade crafts being sold at the Geek Craft Expo held at the Minneapolis Convention Center on Saturday, June 5.

Whether it was an Animal Crossing hat, a “Hamilton” dish towel or a “Pulp Fiction” painting, GeekCraft Expo Twin Cities had something to offer for fans across a wide variety of niches.

After being rescheduled in 2020 due to the pandemic, this year’s GeekCraft Expo, held on June 5 and 6, brought individuals from all corners of the geek community back together again, creating a sense of connection between vendors and patrons alike.

Inside the Minneapolis Convention Center, patrons waited in line to enter the event. Some shuffled through their belongings and pulled out vaccine cards; upon doing so, fully-vaccinated attendees received a “vaccinated” badge to wear, though this was not a requirement for admission. After being checked in, patrons explored the aisles, spoke with exhibitors and browsed the assortment of unique and quirky items around them.

These events have been held across the country since 2016, when GeekCraft Expo was founded by comic book writer Daniel Way and former Ubisoft Community Manager Kimberly Matsuzaki. The markets offer a curated assortment of geek-themed goods produced by local makers and artists.

Way, who not only serves as the event director but also wrote Marvel comic books like “Deadpool” and “Wolverine,” said that GeekCraft was built with the goal of showcasing local small businesses in mind. “We want everyone who’s making this stuff to be able to do this full-time successfully,” Way said.

He explained that this element of craftsmanship contributed to the event’s popularity, as patrons can find functional items that are unique and not mass-produced.

“You can walk around GeekCraft and you can find things you’re going to need, like an oven mit,” Way said. “You can get one that’s made by hand and is extremely good and will last a long, long time, and it looks like the Infinity Gauntlet.”

Carly Beyer, a patron at the expo, said the event allowed her to “grow as a geek,” and created a sense of community among those in attendance. She said it can be hard to open up conversations about certain interests when you don’t know if the other person is interested in the same thing. But at the expo, this wasn’t the case.

“It feels like even though I don’t know a lot of people on a first name basis, it doesn’t feel weird to open any conversation,” Beyer said. “I don’t feel like I have to have an entire explanation prepared for a specific fandom, because they totally know it.”

Carsten Aloin has attended various conventions for over ten years, but this was their first time attending a GeekCraft Expo event. For Aloin, the appeal of the expo was the opportunity to interact with artists and makers in person, rather than simply buying from them online. They also appreciated how the event catered to an array of different fandoms.

“You get a much wider variety of items,” Aloin said. “Especially given that the term geek is very broad.”

Charlie Couture, the artist behind Zombie On Canvas, described his work as “a love letter for cult films.” His table at the expo displayed heavy pop art pieces depicting scenes and characters from “The Shining,” “Edward Scissorhands,” “Pulp Fiction” and a plethora of other iconic films.

The GeekCraft Expo was Couture’s first in-person art show since the COVID-19 pandemic began, and he said he felt a bit rusty.

“It sucks with the pandemic, where it’s like every art show feels like it’s a comeback show,” Couture said. “It’s a culture shock, for sure.”

This year’s expo gave Rivers a chance to reconnect with other businesses and customers that she recognized from past events.

“I like being able to see my nerdy, geeky people again,” Rivers said.