Bacon and Cook collected a total of 871.50 points over their 15 dives. 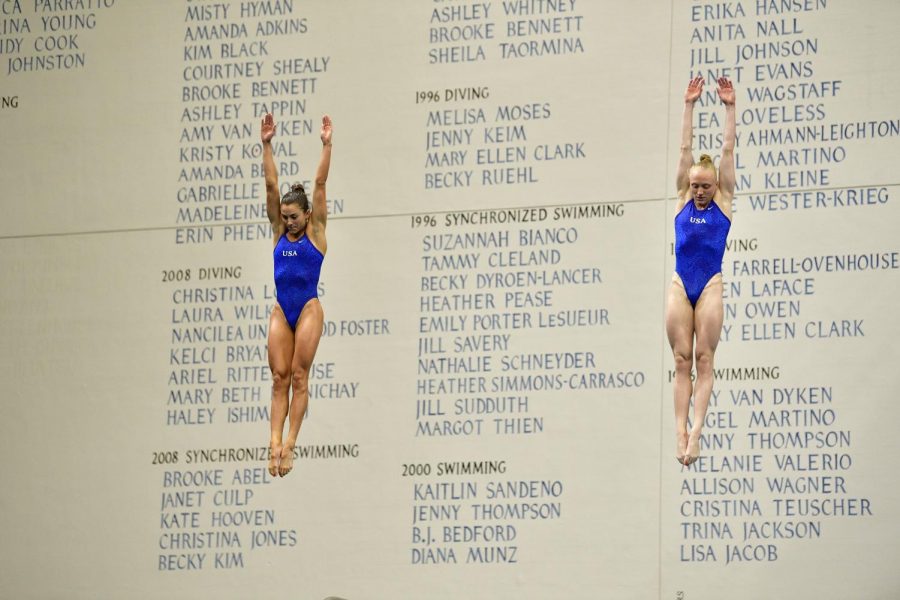 Gophers CSCAA Diver of the Year redshirt senior Sarah Bacon placed second with synchro teammate Kassidy Cook Thursday night at the U.S. Olympic Diving Trials in Indianapolis, Indiana, after totaling 871.50 points over their 15 dives throughout the preliminary, semifinal and final round of the women’s synchro 3m springboard.

Bacon and Cook fell short of qualification for the Tokyo Olympic games this summer after placing second behind Alison Gibson and Krysta Palmer after the pair earned a total score of 899.82 points over their 15 dives.

On Sunday morning, Bacon and Cook competed in the preliminary round of the women’s synchro 3m springboard event, totaling 266.46 points to finish second and secure a spot into the semifinal round.

The duo’s best dive of the preliminary was their last dive. While they had a miss early on in the competition, they pulled together a score of 68.40 on their synchro forward two and a half somersaults, one twist pike dive.

Bacon and Cook also saw similar success in their third dive after earning 67.50 points on their synchro inward two and a half somersaults pike dive.

Although the duo found success on dives three and five, the judges awarded Cook a balk on dive two that cost them a significant amount of points as they scored 32.40.

A balk in diving is when a diver initiates a motion to begin their routine but discontinues it before takeoff. This miss proved to be costly because balks cause a two-point deduction per judge and their score was cumulative throughout the three rounds of competition.

On Sunday night, the duo competed in the semifinals of the women’s 3m synchro springboard, improving their total score from the prelims by collecting 306.93 points for the round and totaling 573.39 cumulatively to secure a spot in the competition’s finals.

Bacon and Cook started the night slowly but quickly got into form for their last three dives of the night.

Once again, their best dive of the round was their fifth and final dive. Their forward two and a half somersaults, one twist pike earned them 73.80 points from the judges.

To conclude their total in the semifinal round, Bacon and Cook scored 50.40 on dive one and 47.40 on dive two.

On Thursday night, Bacon and Cook competed in the final round of the women’s synchro 3m springboard, searching for a first-place finish and qualification for the Tokyo Olympic Games. The duo totaled 298.11 points.

They entered the final round trailing behind first-place leaders Gibson and Palmer by 21 points.

With only five dives left in the final round, Bacon and Cook couldn’t climb their way to the top as Gibson and Palmer extended their lead to 28.32 points by the end of Sunday’s competition.

A few misses in each round proved costly for the duo in qualifying for the Tokyo Olympic Games this summer.