Chastain is set to become the fifth head coach in Minnesota’s program history after a storied playing career at the school. 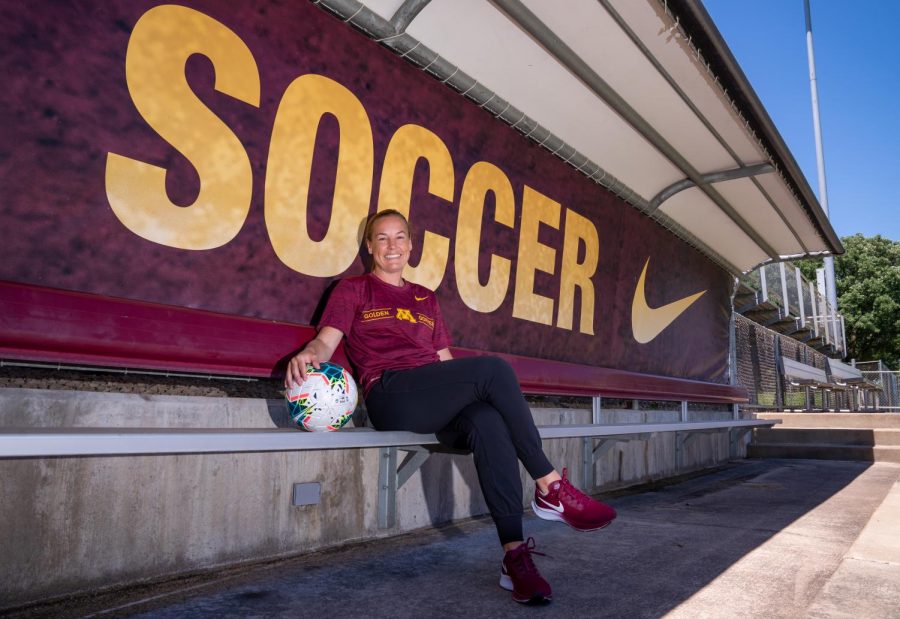 The University of Minnesota announced on June 11 that Erin Chastain has officially been named the head coach of the women’s soccer program.

Erin Chastain attended the University of Minnesota in the late 1990s, where she was a four-year starter and three-year captain for the women’s soccer team. She earned her bachelor’s degree from the Carlson School of Management in 1997.

During her playing days, Chastain (then Hussey) was productive for the Maroon & Gold. She appeared in 82 contests throughout her four-year career, ranking eighth in program history in goals (29), and tied for seventh in assists (25).

Following her collegiate career, Chastain went into coaching. Before returning to the collegiate level, she was initially appointed as the head coach of the Wayzata and Edina U15 Girls’ Premier soccer teams near her hometown of Plymouth, Minnesota.

Her return to collegiate soccer began at Northwestern University, where she acted as the women’s soccer team’s top assistant coach. She stayed with the Wildcats for three seasons before leaving to coach women’s soccer at Santa Clara University.

Chastain assumed the same role as Santa Clara’s top assistant coach for five seasons and led them to great success. The Broncos were National runners up in 2002 and had a handful of other deep postseason runs into the national tournament.

After establishing herself as one of the top assistants in the country, Chastain was given the opportunity to become the head coach for DePaul University women’s soccer in 2007. She has spent the previous 14 seasons as the head coach of the Blue Demons and has found great success during her time with the school, tallying over 100 wins along with a record of 78-44-26 over the last eight seasons. She also led DePaul to two Big East regular season championships and reached a program high of No. 7 in the nation in 2014. She now leaves Chicago as one of the most effective head coaches in the program’s history.

“I am excited to welcome Erin and her family back home to Minnesota,” Gophers Athletics Director Mark Coyle said in a statement included in the University’s announcement. “Erin has a proven track record of success when it comes to recruiting, developing and coaching student-athletes, and I am thrilled for her to lead her alma mater.”

Long-time head coach Stefanie Golan resigned in late May before taking the same position at Missouri. During her time with the Gophers she amassed a record of 92-64-24 across nine seasons. Erin Chastain now looks to revitalize the Gophers’ program. Over the previous two seasons Minnesota has accumulated a record of 8-16-7, and Chastain looks to lead the program back to its winning ways.

Chastain brings in quite the resume of high-level recruiting. While at Santa Clara, Chastain helped bring in the nation’s top class in 2002 and the No. 4 class in 2004. While at DePaul the Blue Demons reached as high as the No. 21 class nationally.

“I could not be more excited to be named head coach of the Minnesota soccer program,” Chastain said in a statement. “I am so thankful to President Joan Gabel, director of athletics Mark Coyle, senior associate athletics director Tom McGinnis and the entire search committee for believing in me and trusting me to lead my alma mater.”

The school recently announced its plans to return to a traditional 10-game fall schedule this season after playing an altered spring campaign the previous year. The Chastain era will kick off on Sept. 18 in a Border Battle clash at home with Wisconsin.

“The University of Minnesota is a world-class institution, and I was so fortunate to be a Gopher student-athlete,” Chastain said in a statement. “This program and the entire state of Minnesota mean so much to me, so this really is a dream opportunity for me and my family. I can’t wait to meet the team and look forward to getting to work.”