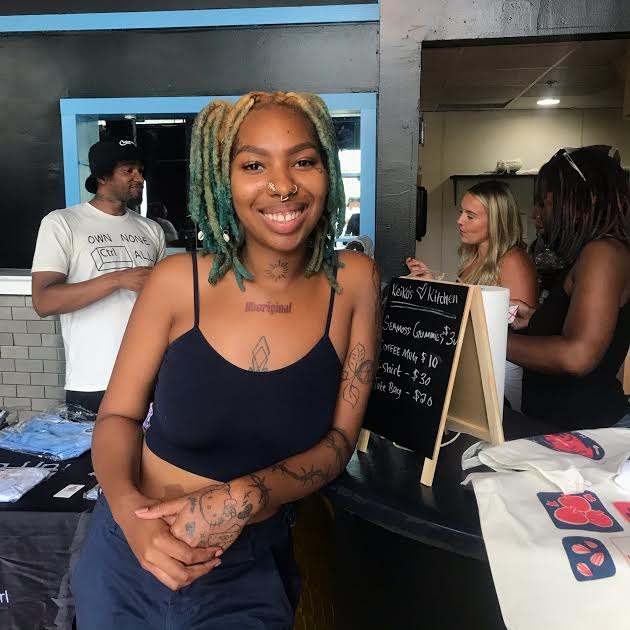 At the age of 23, Mykela Jackson is no stranger to the Twin Cities food scene.

Apart from her status as the founder of Keiko’s Kitchen and Keiko’s Electric Herbs, she is the former head chef of Minneapolis-based Trio Plant-Based and has worked in a handful of other local establishments over the years.

Having grown up in the city, she’s also had the opportunity to observe firsthand the lack of general accessibility and affordability provided to majority Black neighborhoods in Minneapolis when it comes to fresh, healthy food options.

According to the Federal Reserve Bank of Minneapolis, there are multiple neighborhoods in North Minneapolis that qualify as a food desert based on the federal definition, which considers census data regarding proximity to fresh food and household income. It’s those observations that drive her work with Keiko’s Kitchen, whose mission is “to inform, educate, and empower majority-Black communities to take on the plant-based diet,” Jackson said.

It was that same drive that caused a steady stream of people to flow through the doors of the Black Business Pop-up Shop’s second annual Juneteenth event in the North Loop and into Keiko’s Kitchen line, where the business was giving out free alkaline vegan food provided by the plant-based pop-up.

With over thirty Black-owned businesses present, KMOJ broadcasting live, Dolo Harris hosting, DJ Cam Jones on music and Keiko’s free food, the excitement in the air was palpable. On the menu were an Alkaline Blueberry Chk’n McGriddle and a candied butternut squash dish with a recipe that can be found in a virtual exhibit at the Minneapolis Institute of Art, as part of an exhibit titled “In the Presence of Our Ancestors: Southern Perspectives in African American Art.”

“I’m really just trying to work with systems that are already in place but shift them in more positive directions by bringing health, wellness and equality into the community through food and collaborations with other entrepreneurs,” Jackson said.

Keiko’s Kitchen specializes in alkaline, plant-based comfort food — branded “real food for the soul” on the locally embroidered shirts she had available for sale Saturday afternoon. The plant-based alkaline diet Jackson utilizes in her cooking, created by the late Alfredo Darrington Bowman — commonly known as Dr. Sebi, despite not earning the title — relies on the idea that the food one consumes can alter the pH balance of their body.

“I think a lot of people turn away vegan food because they lose this connection,” said Jackson. “When you have really good food, you feel happy. It brings a bunch of emotions, and it can bring a lot of people together. I’m just trying to bring those cultural flavors into meals.”

“I’m not a vegan, but I’ll be vegan for her food,” said Chelsey McKinney, a volunteer responsible for distributing plates at the event. According to McKinney, long-time fans of Jackson’s cooking and newcomers made up the crowd waiting for food when they arrived at the venue to set up for the afternoon.

The food was nearly gone after only an hour and a half of serving up plates to community members making rounds at the pop-up. Vegans and non-vegans alike devoured their food, sharing laughs and exchanging remarks between bites. Jackson stood nearby the whole time, overseeing the table while sharing a word with those who stopped by. She had hoped to bring awareness to her food through the pop-up — a feat she certainly accomplished, based on how quickly everything went.

“I chose her food for the event because we’re a reflection of each other — we’re not only vegan, we’re also Black,” said Rachel Carlson-Williams, organizer of the Black Business Pop-up Shop and Twin Cities business owner. “And it’s important to have those reflections, with the event and the community, to see that I look like her, she looks like me, but we can all still eat healthier and differently together.”

Carlson-Williams grew up with a dream to give back to the community, and she’s done so over the last year and a half by working to coordinate events through the Black Business Pop-up Shop to provide opportunities for the community to gather. An alkaline vegan herself, she met Jackson and discovered her cooking through mutual friends before they became friends. According to Carlson-Williams, Jackson is the “best vegan chef in Minnesota” and was the ideal person to provide food at the event to match its aim of mutual elevation among business owners and attendees alike.

“She is a great chef and business person, but she’s also a great friend as well — and people are comfortable with it,” Carlson-Williams said. “Her energy is great, and she is a light.”