A bearded dragon’s day out: the journey of a reptile who toured the city

The dragon had quite the adventure exploring south Minneapolis before finding its way to the Standish neighborhood, where a resident took it into her care. 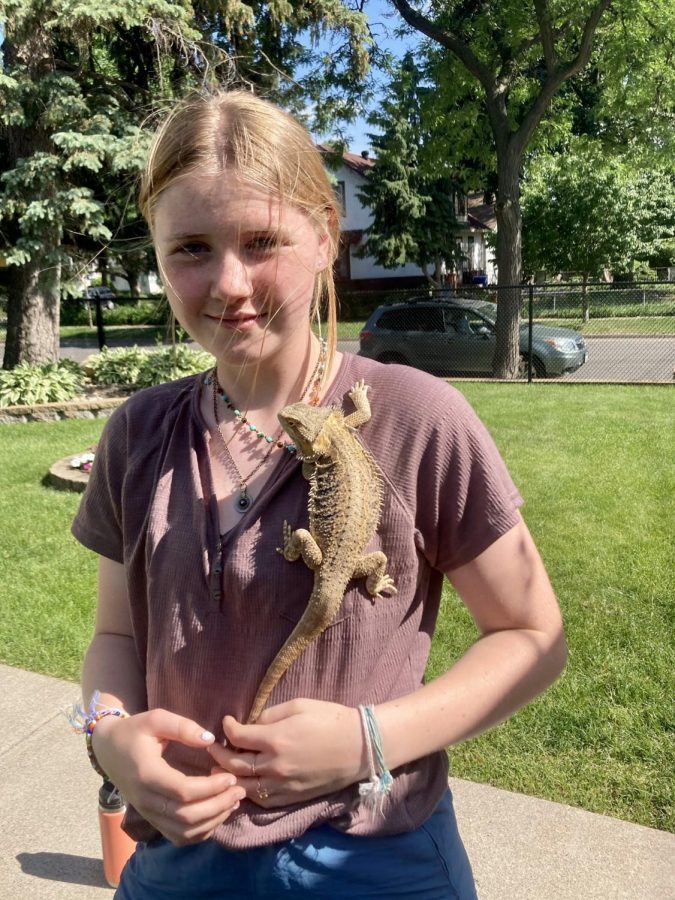 Minnesota is home to a variety of woodland creatures — turkeys, rabbits, deer, oh my! — and it’s nothing out of the ordinary to come across the occasional backyard visitor.

But it’s not every day that Minnesotans are greeted by a cold-blooded reptilian guest.

Grace Riley couldn’t believe her eyes when she found a bearded dragon wandering outside her home in the Standish neighborhood of south Minneapolis on June 5.

“It was like, ‘Am I seeing what I think I’m seeing?’ Like, this is my sidewalk, this is not a lawn decoration gone wrong,” Riley said.

A local reptile store, Twin Cities Reptiles, told Riley that the dragon could’ve walked a few miles around the city that day, touring the streets of Minneapolis on a dangerous adventure.

In hopes of finding the dragon’s owner, Riley posted about her discovery on Nextdoor, Instagram and Twitter. Although no one claimed the dragon as their own, Riley said her posts generated a lot of community support.

“We had all this enthusiasm for reuniting and thanking us for being the ones who picked it up,” she said. “It was pretty fun to see how kind and encouraging people were.”

Reptile owners on social media gave Riley advice on properly caring for the dragon for the time being. She said they were “eager to share their tips and tricks” and recommended things like calcium supplements, UVB lights and even salad recipes that their bearded dragons particularly enjoy.

Some community members offered to bring Riley the supplies she needed to take care of her new reptilian friend, including Katy Rex, who came across Riley’s post on Twitter. Rex is one of the founders of Tiny Dino Buds, a local nonprofit bearded dragon rescue.

After housing the dragon for a few days, Riley turned it over to the rescue’s care. The dragon sustained several injuries, one to her back, as well as fluid build-up in her lungs. The rescue is working to help the dragon return to her “happiest, healthiest self,” Rex said.

Rex said her ultimate goal is to reunite the dragon with its original owners.

Ben Lowe, a University of Minnesota alum who earned his Ph.D. studying ecology, evolution and behavior, said the bearded dragon could have been more evolutionarily equipped to endure this urban trek than other reptiles would be.

Since bearded dragons are native to Australia, Lowe said, they’ve adapted to hot, desert conditions. During its summer season, Australia’s deserts are around 40 degrees Celsius, or 104 degrees Fahrenheit. This summer has already been a scorcher in the Twin Cities, as recent temperatures soared into the 90s. According to the Minnesota Department of Natural Resources, the eight days between June 3 and June 10 marked the worst heatwave on record in Minnesota occurring anytime through the first half of June. Although these conditions were brutal for Minnesotans, they could have served as an advantage for the dragon.

“Our cities are all concrete and asphalt, and they tend to get pretty hot, so that could be something that would help one of these lizards tolerate wandering around on its own,” Lowe said.

A study in the Journal of the Royal Society of Western Australia concluded that, on average, the daily distance traveled by a group of bearded dragons was 115 meters, or .07 miles. Although this is still an “appreciably greater” daily distance than other lizards, wandering a few miles would have been quite the achievement for the dragon.

Despite potentially missing its owner and feeling lost in the big city, the bearded dragon could have explored some pretty cool places on his south Minneapolis route that day.

If she wanted to stray from his typical diet of insects and vegetables, she could’ve grabbed a “Jucy Lucy” from the iconic Matt’s Bar & Grill, topping it off with something sweet from A Baker’s Wife’s Pastry Shop. She could have soaked up some rays in Powderhorn Park or cooled off in the Sibley Park wading pool before touring everything else the area has to offer.

Scott Johnson, manager of Twin Cities Reptiles, said the dragon was pretty lucky to avoid all potentially lethal dangers along his journey.