Minnesota volleyball will have a pair of major contributing seniors returning for another season. 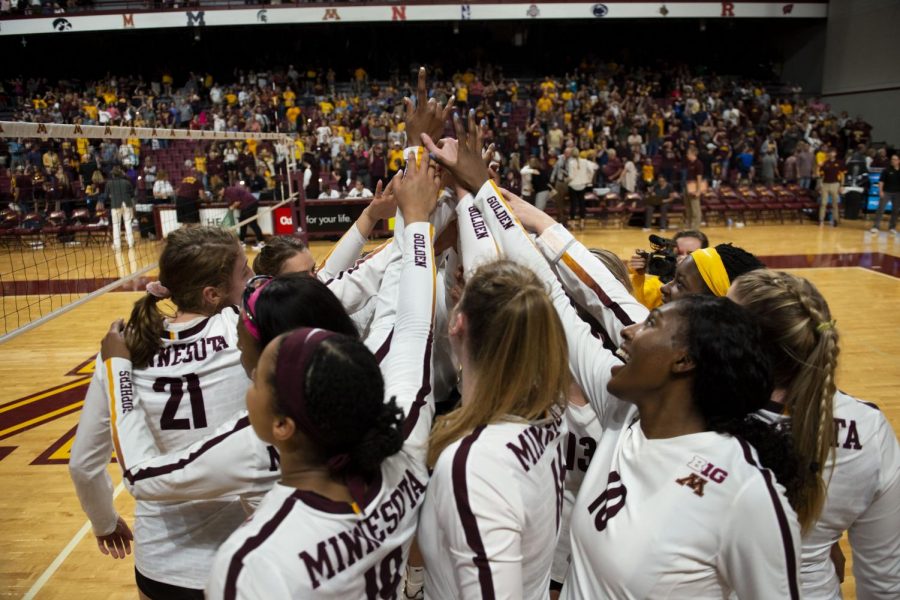 The Gophers huddle to celebrate defeating Oral Roberts three sets to none at the Maturi Pavilion on Saturday, Sept. 21, 2019.

Gophers volleyball seniors Stephanie Samedy and Airi Miyabe have both decided to utilize their option to return for an additional season of competition due to the COVID-19 pandemic.

Stephanie Samedy has already produced one of the most accomplished careers in school history. The opposite hitter is a four-time All-American and All-Big Ten selection for the Maroon and Gold. Last Spring, she had arguably her best season earning 2021 Big Ten Player of the Year. She now enters her final season of collegiate volleyball having totaled 1,485 kills, 1,127 digs and 1,724.5 points throughout her career.

“With the amount of adversity that we all faced this year, there are still many ways we can find the positive within the madness. And for me, that is the ability to continue representing the Maroon and Gold on the court!” Samedy said in an Instagram post. “I’m beyond excited and grateful to announce that I will be returning for one more season as a Gopher!”

Outside hitter Airi Miyabe is now entering her third season with the Gophers and fifth overall. Miyabe, hailing from Osaka, Japan, has appeared in 32 matches and 70 sets for the Gophers since transferring to the school from the College of Southern Idaho prior to the 2019 season. Since arriving in Minnesota, she has compiled 101 kills.

“I want to thank the Minnesota program, coaches, teammates and fans who have supported my Golden Gophers journey. I have been blessed by lots of great people, amazing experiences and countless love. Words can’t express how much I appreciate all of you,” Miyabe said in an Instagram post. “I would like to announce that I will be returning next year for the 2021 fall season as a Gopher!

With the addition of Samedy and Miyabe, Minnesota now returns 11 letterwinners into this season. After a 16-3 record last season and a second-round exit in the NCAA Tournament, the expectations will be high for the upcoming campaign.

After playing in the spring for the 2020-21 season, the Gophers will return back to their normal fall schedule this season. The 2021 fall season will begin Aug. 27-28 in Madison, Wisconsin, at the Big Ten/Big 12 Challenge against Baylor and TCU.