Students and alumni gathered outside the Civil Engineering Building to celebrate the now official federal holiday. 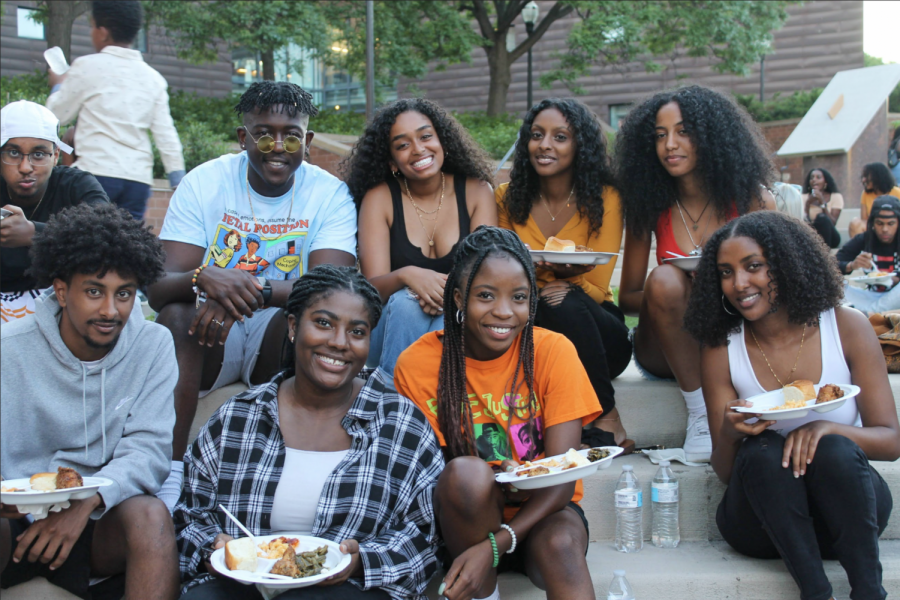 Students attending the Juneteenth event at University of Minnesota on Saturday June 19.

University of Minnesota students and alumni gathered at the Civil Engineering building on June 19 to celebrate the second annual Juneteenth event hosted by the Black Student Union (BSU). The event was held in collaboration with seven other multicultural student organizations.

People from all different backgrounds gathered outside and celebrated with food, games and socialization. Attendees said it was also a place to remember the significance of Juneteenth and those who fought for freedom.

“For me, Juneteenth is about remembrance. It was not just the emancipation that freed the slaves, it took time,” said Mahdy Michael, the secretary of the African Student Association. “Remembering that it was just the beginning of Black peoples’ freedom and that it has been a journey that we are on to this day. We definitely have to tie back to the beginning to recognize the present.”

As guests arrived, multiple organizations set up display boards and prepared food while music played from a speaker, prompting mingling and dancing among the crowd.

Juneteenth commemorates the day of June 19, 1865, when the last enslaved people were freed in the state of Texas two years after the Emancipation Proclamation went into effect.

“I am here to celebrate what Black can look like and the power it can become when we all come together to celebrate something,” said Bemnet Habtamu, the secretary of the Ethiopian Student Association.

Juneteenth is the longest-running African American holiday and was just established as an official federal holiday by President Joe Biden on June 17. Over the past 100 years, there have been only four new holidays added to the United States national calendar.

But even with the holiday’s official recognition, students at the event said more needs to be done.

“Even though I appreciate [President Biden] making this an official holiday, there are so many steps he still missed that we need right now,” Habtamu said. “What we really need is to save our people.”

Following the murder of George Floyd and the deaths of Daunte Wright and Winston Smith after interactions with law enforcement in Minnesota, this year’s event had added importance for Luna Yemane, the vice president of the University’s National Association of Black Accountants chapter. Yemane pointed to Juneteenth’s link to education and the importance of teaching the country’s truths.

“This generation and the kids younger than us are going to be the next leaders of this country — it is inevitable,” Yemane said. “The least we can do as a country, if we can do anything, is start teaching the truth, telling the truth and acting with integrity.”

Yemane also acknowledged the Black community’s relationship with police, saying leaders need to start “implementing police forces that are constructive and not there to scare people and incite fear in others.”

Various students cited a number of what they called “performative” actions by the University that happened over the last year.

On June 17, University President Joan Gabel sent out a system-wide email acknowledging Juneteenth and its then-pending status as an official federal holiday.

The University’s African American and African Studies Department faces impending budget cuts for the 2021-2022 school year that could affect course offerings and future growth in the department, according to a statement by Yuichiro Onishi, an associate professor and chair of the department.

The statement received over 200 signatures and included 60 testimonials from University community members.

“I think it is very funny because they just told us they are spending so many million dollars on diversity, so why is the only Black department here at the University of Minnesota losing funding?” Abdullahi said.

Following the student organization introductions, Camille Winston, chair of University engagement for the BSU, addressed the whole event and discussed what Juneteenth means to her.

“I am very much here for the community. I mean, you look around and see all these beautiful faces, it is just very good to see everyone kind of back at it,” Winston said. “It is recognizing the real history of the United States because the Fourth of July is coming up, and the Fourth of July is not when people were free so I think it is really important that everyone recognizes this day.”

Following Winston’s address, people began lining up for food and beverages. Five members of Alpha Kappa Alpha Sorority, Inc., all in matching shirts, waited to get in line.

“For me, today is just really celebrating,” said Danasja Hall, an active member of Alpha Kappa Alpha. “We are not all the way free, but it is celebrating growth, how far we have come and how far we still have to go. It is celebrating our history and what we have had to go through.”

Job Okeri, a recent graduate of the University, said Juneteenth is a reminder that changes still need to be made.

“I think it is a reminder for everyone of our dark history, and a call for action to make the changes we need to be a better country,” Okeri said.

Nathanael Ashton-Piper contributed to this report.