Even after suffering a knee injury, new Minnesota transfer Parker Fox’s plans have not changed. 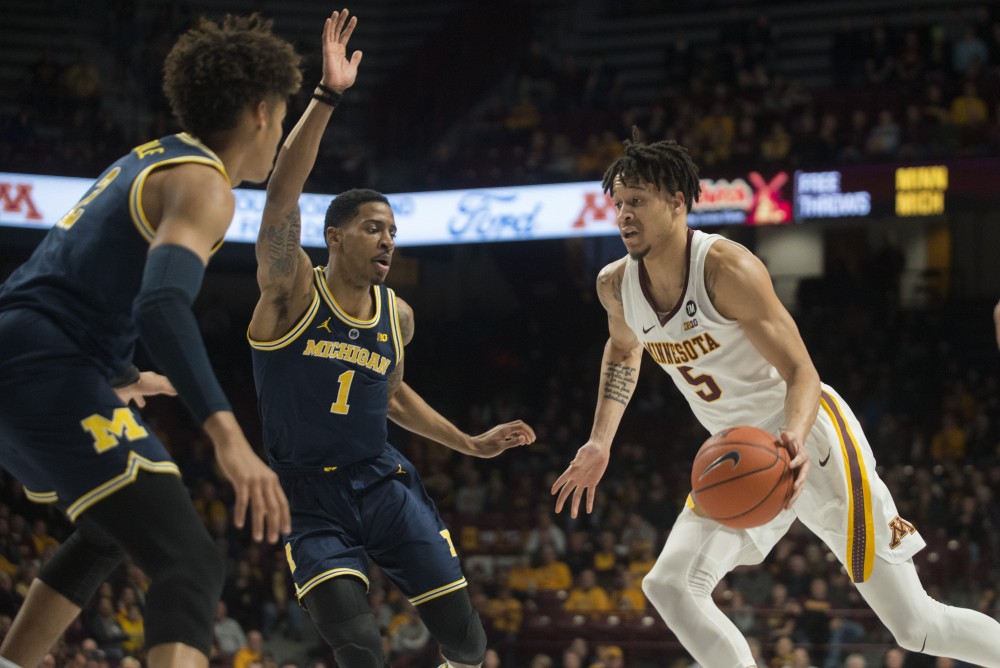 Junior Amir Coffey dribbles the ball across the court on Thursday, Feb. 21, 2019 at Williams Arena in Minneapolis. The Gophers lost to Michigan 69-60.

In the summer before his senior year of high school, Parker Fox was playing AAU basketball for the Minnesota Heat. He and teammate Sean Sutherlin had desires of playing basketball past high school, but neither player was being recruited heavily at the scholarship level.

Nearly four years later Fox and Sutherlin are at Minnesota, their dream school, playing for the program they grew up rooting for.

Fox, from Mahtomedi, Minnesota, had a very productive high school career with the Zephyrs, finishing as the Mahtomedi High School record holder for points in one game (39), points per game (22) and points in one season (538). His success did not result in much attention on the recruiting scene, earning only one scholarship offer from Northern State University, a division two school.

After making the trip to Aberdeen, South Dakota for his official visit, Fox would commit to the school less than one week later. When he began his collegiate career, he redshirted his first year with the Wolves and prepared for his true redshirt-freshman campaign where he would finally have the opportunity to prove that he belonged.

In the 2018-19 season, his first as a collegiate basketball player, the 6-foot-8-inch forward led the Wolves in scoring off the bench averaging 10.5 points per contest along with 5.3 rebounds.

Fox bettered his stats the following year, and credits the extra work he put in off the court for his improvement.

He ended that season shooting a team-high 60.5% from the field while averaging a team-high 19.9 points and 8.8 rebounds per game. On the defensive side of the ball he led the team in blocks, with 75 on the season.

With serious expectations entering his redshirt-junior season, Fox lived up to the hype and then some. His 22.3 points, 9.9 rebounds, 2.5 assists and nation’s best 3.5 blocks a game would earn him All-America honors. He put together two jaw-dropping performances, with 39 points and eight blocks against Moorhead, and 21 points and 21 rebounds against St. Cloud State.

Fox’s historic 2021 campaign led to serious success as a team for Northern State. The Wolves finished with a 19-2 record on the season, and reached the third round of the 2021 NCAA Division II National Tournament until falling short to eventual national champion Northwest Missouri State.

Following the season, he entered his name into the NCAA’s transfer portal. After being contacted by more than 100 schools, the high-flying wing opted to return home and play for the Gophers.

“I think that came from our team’s success to be honest with you. All of the best players in the country are usually on a pretty good team,” Fox said. “I played in 107 games and would win 90% of them. Playing for a program which expected excellence allowed me to strive to be a player that they looked at to score the rock.”

As a childhood Gophers fan, it made it hard for Fox to choose any other school than the one he grew up rooting for.

“I have always dreamed of being a Gopher, and he [Ben Johnson] knew that. Me and coach Johnson formed a really strong relationship and I get to come home and be 20 minutes from home so that’s really exciting to me,” Fox said.

He is now set to reunite with former AAU teammate Sean Sutherlin, who announced his plan to transfer to the school in late April.

Fox’s plan to contribute to the team right away has unfortunately hit a roadblock. After suffering a knee injury in a workout less than a week after commiting to the school, Fox will have a six-to-nine-month recovery time before he returns to full basketball activities.

Fox’s injury, the fact that the Gophers have a first-year head coach, nine total new players and only one returning from last year’s team raise serious concerns of how much success they can find this season.

“It motivates me even more. I have always kinda been the guy that has had the prove-them-wrong mentality,” Fox said. “Nobody thought that I should be playing division two basketball out of high school, so I have always been that guy that would love you to doubt me.”

After having surgery in late April, there is still a slim chance that Fox will be able to contribute in the upcoming season. If he is not able to make his Gophers’ debut during the 2021-22 campaign, however, he will still have two years of eligibility remaining.

The Gophers are fewer than 140 days away from tipping off their 2021-22 season on Nov. 9 against UMKC at Williams Arena.