Regents approved the $4 billion operating budget, which includes a tuition increase and salary increases for staff and faculty. 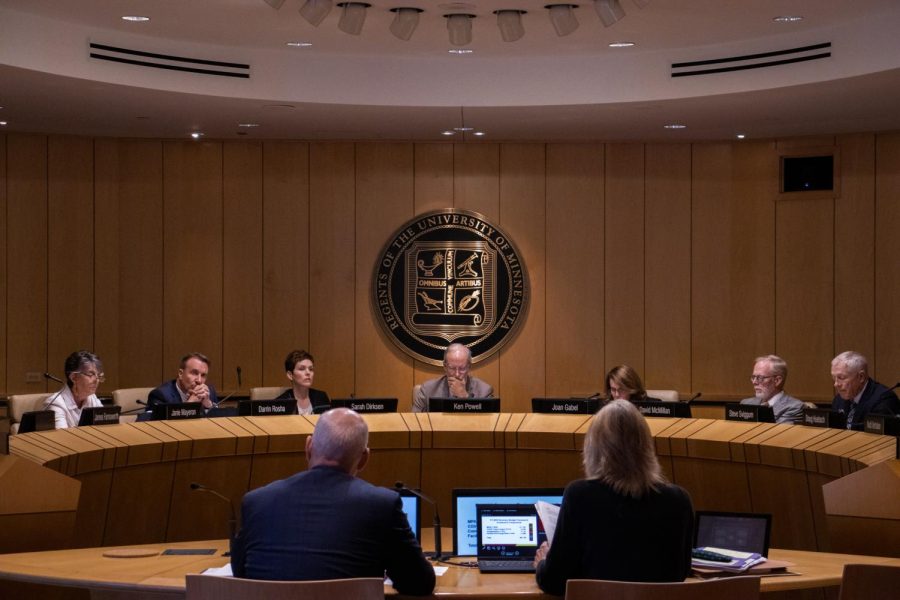 President Joan Gabel and the Board of Regents discuss the University's 2022 budget in McNamara Alumni Center on Tuesday, June 29.

The University of Minnesota Board of Regents approved a new $4 billion budget, which includes a 1.5% increase in tuition and compensation for staff and faculty, at a special meeting Tuesday.

The board also voted to change the name of the University’s football stadium from TCF Bank stadium to Huntington Bank stadium at the special meeting.

Students respond to the tuition increase

The board accepted public comments on the budget proposal prior to the special meeting. Many students asked the board not to increase tuition, with many citing the continuing effects of the COVID-19 pandemic and economic uncertainty that has arisen in the last year.

“Raising tuition in the aftermath of the pandemic is a short-sighted decision that will only further burden the lives of current students and graduates,” wrote University student and Minnesota Student Association representative Jack Flom in docket materials. “The University should not rely on the students to prop itself up, it should rely on the State.”

“For the past 18 months we have felt unsupported and excluded from the University,” Osman wrote. “We have paid full tuition for not a full education, we have had limited to no access to services but we still paid for them. Now the University wants to turn around and take more money for us?”

Regent Darrin Rosha also opposed the tuition increase and pointed out the difference in tuition between the University of Minnesota and the University of Wisconsin-Madison, which is less than the University’s rates. He encouraged administrators to consider the need to remain competitive with peer institutions.

While Regent Janie Mayeron voted in support of the tuition increase, she said the University should prioritize long-term planning for the budget rather than short-term fixes to solve current financial uncertainties.

“We all want to freeze tuition, reduce tuition, but I think [the conversation] needs to be about all the levers that drive tuition,” Mayeron said at the meeting. “I think it has to be done in the overall context of what we are doing for tuition and pricing, which takes into account what our competitors are doing.”

Many faculty and staff members said that while they supported the 1.5% increase in compensation, these rates are often below typical market wages. Over the past year, the University has introduced extended pay cuts, furloughs and hiring freezes that have also impacted faculty and staff.

“The lack of funds for market salary adjustments for civil service employees has remained stagnant for over a decade,” wrote members of the Civil Service Consultative Committee in a statement. “However, it has been made explicitly clear that civil service employee morale is very low, and has been for several years.”

“We had originally asked for $46.5 million from the state of Minnesota,” Frans said. “We will have to make some adjustments in 2023, but the important thing right now is that we did get the amount requested for 2022 coming up.”

University administrators also eliminated the additional fees students were required to pay for online education. The fee will now automatically be incorporated into the cost of attendance.
“This goal really was to streamline the tuition charge into one tuition charge, whether the course is online [or in-person],” Frans said. “So, it’s really designed to make it fair for everybody so no one has to make that choice and pay any differential for the online versus in-person class.”