“I want to push student government out of the box”; MSA leadership discusses goals for the upcoming school year 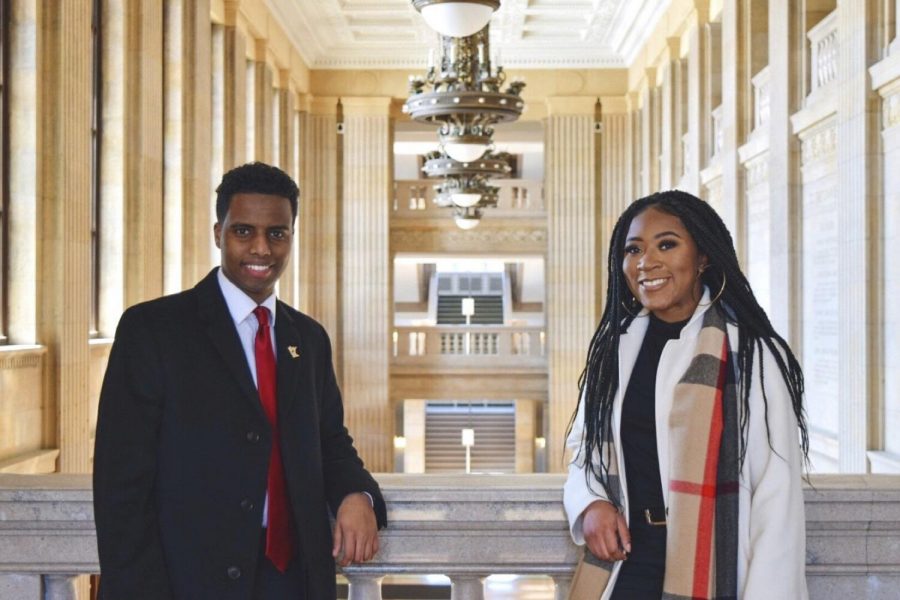 The Minnesota Daily sat down with the new Minnesota Student Association (MSA) President Abdulaziz Mohamed and Vice President Samiat Ajibola to discuss their plans for advocacy and what they are excited to accomplish as MSA’s new leaders in the coming year.

How does it feel to be elected as MSA’s president and vice president?

Mohamed: I don’t think it has necessarily set in yet. It’s really humbling to be able to be elected as student body president of one of the largest undergraduate student populations. I’m really looking forward to this opportunity to represent students at all levels of government, as well as at the institutional level, too.

Ajibola: I am very honored. Honestly, if I was asked if I would be in this position a year ago today, I would probably laugh because I never saw myself in student government. But I realized that a lot of students don’t see themselves in student government, which is a big reason why I wanted to run in the first place. It’s not a place that’s super prestigious and only for certain types of students, but it is really a place for anyone who’s just passionate about advocacy.

What are your goals for the upcoming year?

Mohamed: One of our goals for this upcoming year is to meet the basic needs of students. This pandemic has exacerbated many issues that students have been facing for some time now, some of which being food insecurity, housing insecurity, college affordability and worsening mental health. With that comes some personal and professional responsibility to get it right this year. And for us, by pursuing a multifaceted advocacy approach that engages with the Board of Regents, University administration and elected officials at the local, state and federal levels of government, there’s immense opportunity for change when it comes to dealing with these types of issues.

Ajibola: My goal, and I say this a lot, is just to make everyone really uncomfortable. I want to push student government out of the box that they’re usually in. I want to push administration out of the same pattern of the way that they’ve been interacting with students. I also want to push students to rise to an occasion where they realize that they’re paying tuition for this University, so this is their school, and whatever they want, as long as it’s valuable to every single student, I would love to push for it.

What are you most excited to do in your first semester?

Mohamed: I’m very excited to go back in person and have in-person meetings. There’s so many people that I hope to have the pleasure of seeing and working with, some of whom are MSA members, student groups and faculty alike, and just getting back to campus life and having an in-person MSA experience is something I’m looking forward to.

Ajibola: I want a food co-op so bad. I need a grocery store on campus [as soon as possible]. To have our campus be classified as a food desert when we’re one of the top universities in the world seems really backwards to me. I want to give every student a chance to find affordable food that’s also healthy.

How do you feel that MSA has fallen short in the past and how do you plan to improve?

Mohamed: I’ve been in [MSA] since my freshman year, and one thing I’ve noticed is that, while MSA has done a great deal to help students, at the end of the day, nothing has fundamentally changed for students. My diagnosis is that change and progress happens with narrative shifts in our administration, and the Board of Regents have had a narrative of comfortability and complacency. This year especially, we’ll be looking at shaking up the comfortable and pushing to change the University’s narrative by empowering and uplifting students through our advocacy.

Ajibola: I think that MSA has fallen short in the fact that they really are passionate about important issues, but then we pass things through forum and when [the administration] says no, that’s just kind of it. And that’s super frustrating to those who worked hard and also to these students who really need things. I really want MSA this year to not take “no” for an answer, especially when it’s for the common good of all students.

Mohamed: Although MSA hasn’t formally taken a position on mandating the vaccine, what was most concerning about the University’s announcement of this decision was the lack of measurable action steps to drive up the vaccination rate and help students feel safe when coming back to campus. I think one of the ways we will emerge from this pandemic is to be strategic and creative about how we encourage folks to get vaccinated, and ensure students’ health and wellness. These conversations will be extensive in the coming months and I look forward to engaging in them.

Ajibola: My background is in public health, so I have a unique interest in this. Mandates can be important if they’re utilized correctly, but I don’t think a mandate is absolutely necessary to get people to get vaccinated. When we think about vaccines, we have to remember the institutional racism against other communities and the fear that has brought in the medical system. We also have to think about different religions and things like that. I would like to see more campaigns focused around vaccinations and overall, not just vaccinations, but how to keep yourself safe on campus — with or without them. So, talking about the use of masks and how they work, talking about washing your hands, about talking about taking care of yourself … really making sure that everyone’s educated on how that works.

Is there anything else you would like to add?

Mohamed: I think the impact that I want to have, and something that I’ve heard from past MSA presidents, is to leave the organization and the University better than when I found it. I think to step into a leadership position of this magnitude, representing 35,000-plus undergraduate students, can seem daunting. But also it’s an honor to be able to serve in this position and to have an impact like that is something that will not come easy, but I really look forward to that challenge.

Ajibola: Over the past couple of months there has been a lot of mistrust in MSA as an organization, and I think that it’s really fair to have that mistrust, but also to remind people that every single student at the University is a member of MSA whether they like it or not. And as a member of an organization that reflects us as a student body, I want everyone to know that they have a voice and that they have a stake in the organization and this University, and be willing to voice what they need and be able to come to all of us and say what they want — and then we can formulate a plan to make it happen.

This interview has been lightly edited for clarity and length.