The veteran big man has accepted the additional season of eligibility granted by the NCAA. 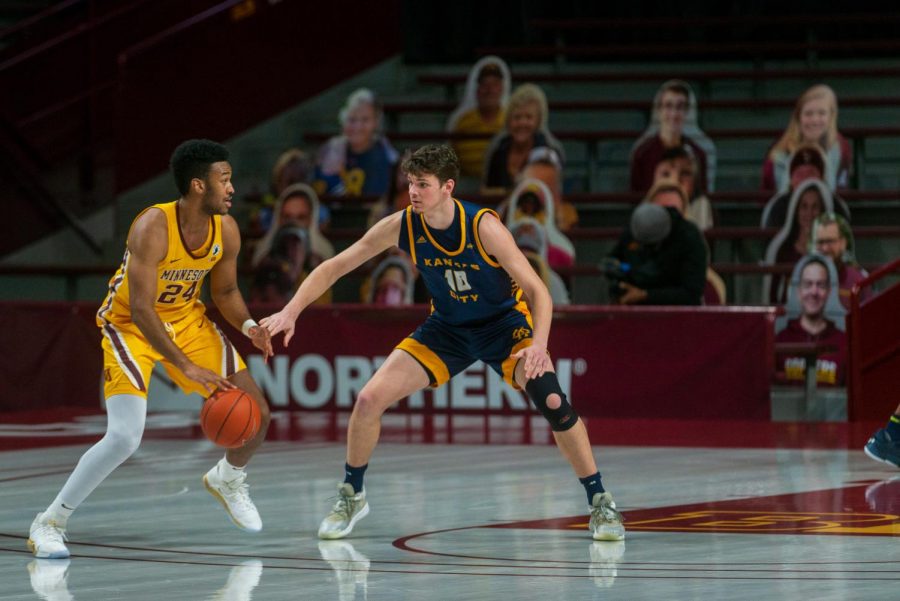 Gophers forward Eric Curry challenges a defender at Williams Arena on Dec. 10, 2020. The Gophers went on to defeat the Kansas City Roos 90-61.

After stating that the 2020-21 season would be his last at the collegiate level, veteran forward Eric Curry has had a change of heart, announcing his plans to play one final season with Minnesota.

Hailing from Memphis, Tennessee, Curry has had a tumultuous Gophers career. He made an instant impact as a true freshman, averaging 5.5 points per game. Unfortunately, he battled knee injuries, playing in only 15 games across the next three seasons. Last season as a redshirt senior was Curry’s healthiest since his freshman campaign. He played in 29 games, averaging 15.8 minutes and 3.7 points per contest.

“I’m so incredibly excited for Eric,” head coach Ben Johnson said in a statement. “I’m happy with how he is feeling physically first and foremost, and that he is hungry to compete and lead for one more year. I know he is pumped to be able to wear the maroon and gold and we are just as thrilled to have him back with us.”

Standing at 6-feet-9-inches, Curry will likely play a large role again for the Gophers in the upcoming season. He will serve as a much needed veteran post presence on a roster that lacks experience and depth in his position. After being previously recruited to Minnesota by then assistant Ben Johnson, Curry’s relationship with the now head coach could prove to be very valuable.

With the addition of Curry, the Gophers currently have two open scholarships spots, as Ben Johnson and his staff continue to construct the roster. We are currently 125 days away from Minnesota hosting UMKC on Nov. 9 to kick off the 2021-22 season.