Ian Karp, a University of Minnesota 2020 graduate and curatorial fellow at Mia, organized “The Fly Zine Archive: A Chronicle of Punk, Queer and Anarchist Counterculture.” 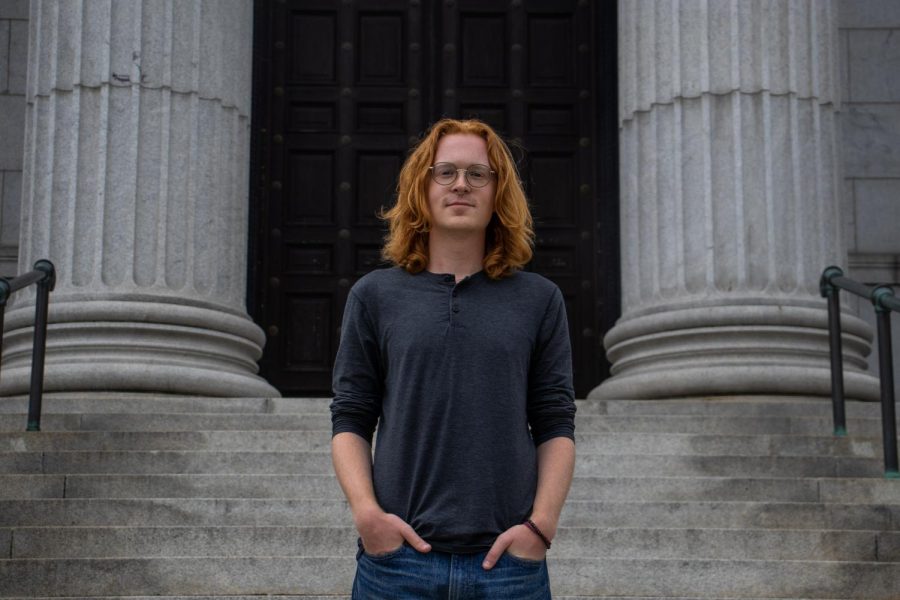 Curatorial Fellow Ian Karp poses in front of the Minneapolis Institute of Art (MIA) on Tuesday, July 6. Karp, a University of Minnesota 2020 graduate, is organizing an exhibition of The Fly Zine Archive, "a collection of zines, comics, artist's books and printed ephemera from countercultural scenes of the 1990s and 2000s," according to the MIA website.

Ian Karp remembers visiting art museums with his grandpa when he was young. They would stroll through the exhibits and admire American landscape paintings, which were some of his grandfather’s favorites.

Now, 16 years later, he’s organizing his own exhibition at the Minneapolis Institute of Art (Mia).

“The Fly Zine Archive: A Chronicle of Punk, Queer and Anarchist Counterculture,” organized by Karp, will be on display at Mia beginning July 15. The exhibition is free, and it will be open to the public until April 24, 2022.

The Fly Zine Archive (FZA) was compiled by Fly Orr, an activist, artist, writer and squatter based out of New York City, and it came to Mia in 2018. It consists of nearly 2,000 printed works – zines, comics, pamphlets and more – that Orr collected, created by “punk, anarchist, feminist and LGBTQ+ artists.” Spanning the 1980s to the present, the collection represents various themes that tied these communities together, like revolution, irreverence and empowerment.

Karp said he organized the exhibition around its central themes, grouping together works that represent ideas like anarchism, political resistance, protest and radical history, as well as gender, sexuality and identity.

According to Karp, zine archives are most often found in libraries rather than art museums, so Mia’s acquisition of the FZA is not only significant in breaking down barriers within the art world, but also in highlighting underrepresented voices. “Traditionally, all the culture that’s represented in the zines hasn’t been given space in the art museum,” he said.

Karp graduated from the University in 2020. He studied art history and classics, which combined his interests in visual and ancient culture and humanities. Prior to graduating, Karp held an internship at Mia, which is when he began working with the FZA and cataloging its thousands of items.

After working as an intern for a few months, Karp was offered a curatorial fellow position in the Department of Prints and Drawings back in 2019. Tom Rassieur, the John E. Andrus III Curator of Prints and Drawings, said Karp is relatively young to be in this position, as fellows are often graduate students.

“[Karp] has shown a remarkable intelligence and diligence that we truly value and admire,” Rassieur said. “He’s had a strong work ethic and is very bright, so it’s been a pleasure for all of us to have him.”

Rassieur mentioned that adding the FZA to Mia’s collection could bring attention to works that are made and delivered in a format that challenges the traditional conceptions of fine art.

“Especially in the world of prints and drawings, we’re often blurring the boundary between so-called high art and low art. There are people who see themselves as gatekeepers and standard-setters … but we want to mix it up,” Rassieur said.

Orr, who brought the archive into being, shared a similar sentiment.

“Zines and comics were looked down on by the ‘art world.’ The ‘art form’ was considered too messy, inconsistent and, in many cases, confrontational,” Orr said in an email to the Minnesota Daily. “Having this exhibition is very validating in that zines are now being given the respect that they deserve.”

Dustin Steuck is a visitor experience representative at Mia. They’re also a member of the 2SLGBTQIA+ Staff Work Group, which centers queer voices and their needs. Steuck said the group serves as a resource for 2SLGBTQIA+ folks and pushes for various initiatives within the museum, such as promoting inclusive hiring practices and “queering the collection.”

When it comes to representation, Steuck said art and museums play highly influential roles. “For a lot of people, it can be their first access into something that’s beyond the identities that they occupy,” they said.

Steuck thinks the FZA exhibition has the power to do just that, as it focuses on representing narratives that have historically been excluded from dominant culture. “I think it’s going to be so impactful, especially at somewhere like Mia, in which a huge portion of our audience are older and more privileged,” he said. “I think it’s also a really great opportunity to cross generations and hopefully start conversations.”

Ultimately, Orr would like the exhibition to challenge its viewers’ preconceptions and spark curiosity.

“What I would like most is to inspire others to look beyond their own experience to see something new, to question themselves or others or to push themselves to create something new,” she said. “I’m sure that the audience, whoever they are, will be inspired in some way.”

Karp said he’s excited for people to be able to see such a special collection, as zines have certain qualities that make them stand out.

“What you see in zines, it’s hard to see elsewhere. The writing that you read in zines, you’re not going to find published on Twitter, and it’s not going to be in a blog,” Karp explained. “It’s personal, it’s diary-like, it’s very memoir-based … so in that way, it’s really a unique experience.”