Calling all cinema lovers and movie-theater-popcorn enthusiasts — St. Anthony Main Theatre is back in business

After a year of virtual cinema, the closest movie theater to campus has reopened its doors to the public. 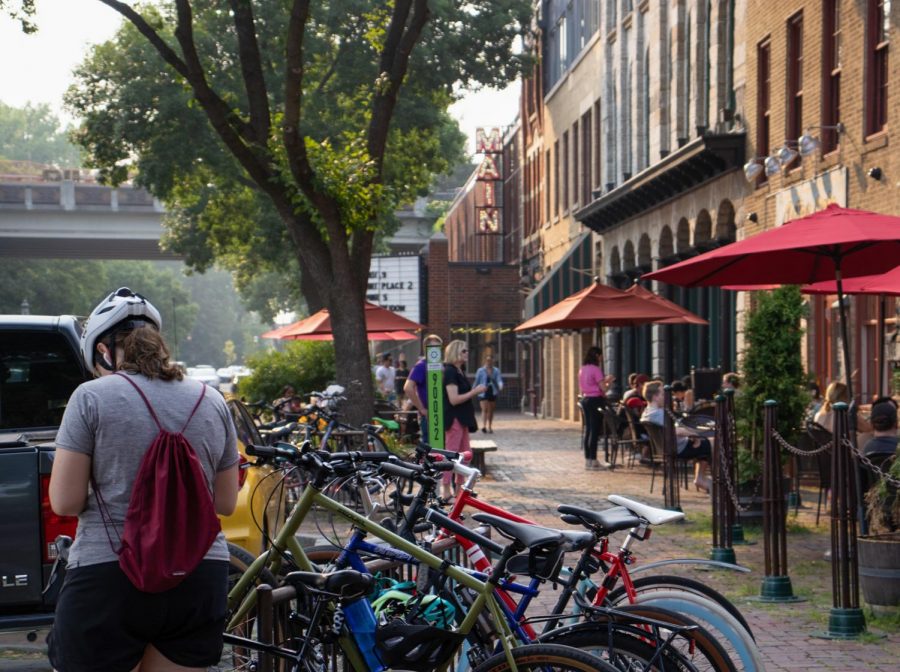 A bustling Main Street of St. Anthony Main on July 11 in Minneapolis, Minn. Theaters and restaurants have reopened after closing due to COVID-19.

Slick red vinyl seats, hushed whispers as overhead lights dim, an occasional slurp of someone’s Diet Coke and the smell of stale popcorn that lingers in the air long after the audience has dispersed — these are the bits and pieces of the American movie theater experience that set it apart from streaming the latest hit from the comfort of one’s own living room.

They also happen to be the things that you’ll find have remained constant at the St. Anthony Main Theatre, which reopened at the beginning of the month after a year-long closure. The theater opened for one month last summer after its initial shutdown in March 2020, but ended up closing shop once again due to pandemic-induced delayed film releases.

Audiences have been steadily flowing in as the theater eases into in-person screenings with a 75% capacity limit in each screening room. In fact, the theater had its most successful weekend in years after its July 1 opening, according to MSP Film Society publicity manager Kelly Nathe. The Film Society reported over 500 attendees during the theater’s first week open — no small feat for the independently-owned theater.

“There’s sort of this visceral energy of people coming in and running into each other at the movies, running into other film-lovers and having conversations about the films,” said Nathe.

The Film Society has expanded to two of the theater’s five screens instead of just one, allowing opportunities for more independent screenings. The Film Society is currently showing “Summer of Soul,” “Riders of Justice” and will soon include “Roadrunner: A Film About Anthony Bourdain.”

Other movies playing at the theater include “The Forever Purge,” “F9: The Fast Saga,” “Black Widow” and “A Quiet Place Part II.” More information and tickets can be found here.

“It’s encouraging that people are happy the theaters are opening and they’re coming back,” Nathe said. “I think people are sick of sitting on their couches and streaming.”

Streaming services grew by nearly 50% during the pandemic, according to The Wall Street Journal. Given that they provide households with instant access to most films, going to an actual theater to watch a movie these days is centered around the atmosphere.

So, what’s drawing people back to the theater?

Beyond popcorn and the chance to spend a prolonged amount of time in a dark, air-conditioned room, the theater also offers a student discount at the box office.