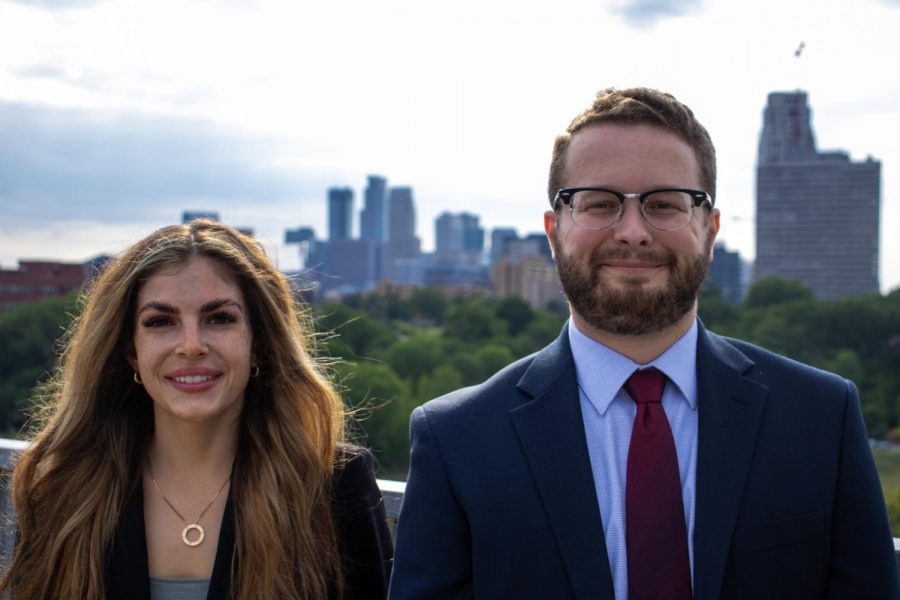 President and Speaker of the Council of Graduate Students, Rielle Perttu Swanson, left, and Richard Gonigam pose for a portrait on the Washington Avenue Bridge on July 9 in Minneapolis, Minn.

Minutes after the first executive board meeting of their new term as the speaker and president of the Council of Graduate Students (COGS), Richard Gonigam and Rielle Perttu Swanson sat down with the Minnesota Daily on July 9 to share their goals and priorities for the upcoming year.

How does it feel to be elected as speaker and president of COGS?

Gonigam: “I’m in an interesting scenario in that I got here in August. So, I’m not only new to COGS, but new to the University of Minnesota. Not many people get to say, even in their graduate career, that they’re co-leading an organization and responsible for representing the interests of 12,000 employees and students at one of the largest state systems in the United States, or that they’re responsible for managing that kind of nonprofit. So, it’s a little cliche, but I’m a little honored. It’s also an interesting time to be in this role. There is a lot of uncertainty as to how things are going to move forward and how our organization itself is going to function in the next year, but it’s exciting.”

Swanson: “Looking back on being in undergrad, I never expected this. So, exciting. Scary.”

What unique perspectives do both of you offer to the Council?

Gonigam: “The work that I did at my undergraduate institution spanned really broadly across student affairs, department level administration, college level shared governance and the senate and student government at that university. One of the unique things that I have is a really wide breadth of experience in different shared governance systems and different styles. Not just differences between the [University of Minnesota] and University of Illinois, where I went, but differences at different levels, even, and an attention to detail that comes with that. It requires a tremendous amount of not only strategic thinking but also really rigid non-strategic thinking when you’re trying to accomplish an advocacy goal because there are defined responsibility areas. There are people, committees and processes for many of these things already. It’s important to be able to simultaneously be very rigid, because we have to stay within our constitution or within [Robert’s Rules of Order], or within the way we go about things, and also flexible enough to develop a strategy that allows you to move forward and reach a productive conclusion with administrators.”

Swanson: “I never was in [undergraduate] student government. So, being in graduate student government is completely new to me. I was the representative to the Board of Regents before my role now as president, so that was my first introduction into student government. I’m like a non-traditional graduate student in the perspective that my funding has been insecure for the last five years I’m going on now. I’m aware of what it’s like to experience funding issues [as a graduate student] … Throughout my graduate experience, from my master’s to my Ph.D., we’ve just been putting together different funding sources. So if the department had a teaching assistantship, I would take that; if they had a lecture role available, I would take that. I’ve been a research assistant every summer to get through. Putting on all those different hats and blending into those different experiences have made me diverse when it comes to understanding graduate student issues.”

What are some of the [internal] goals that you have for the next year?

Gonigam: “The goals for this year are, and they’re going to sound a little blasé, but it is bringing graduate students back into the fold of our organization. We have three missions. The first is the advocacy that we do on behalf of graduate students, the other two are our grants program and providing a social space for graduate students. One of the big differences between our education and an undergraduate education is we’re very siloed. Had I not met Rielle through this organization, I would have probably literally never seen her ever on campus … So, for a lot of graduate students, the only opportunities that they get to interact with students outside of their college and in other fields is our programming. And that hasn’t been there for an entire year, nor has our grants program. That’s the largest portion of our budget and a tremendous amount of the money that we collect goes back to supporting graduate students. So, part of my goal is to just bring COGS back up to speed and get us back engaged with our constituents.”

How do you think the COGS organization has fallen short in the past and how do you plan to improve?

Swanson: “Previously, I feel like participation has been low just because people haven’t felt confident, welcomed and included in the organization. These are things that, moving forward, Richard and I really want to focus on — getting up our engagement, having people want to come to these meetings, participate and feel like they’re actually being heard … I also feel we have really good directors coming in for this year. I feel like that will also change our environment in COGS for people who want to be more involved. Historically, COGS had a reputation where people didn’t feel like they could speak their voices or be included. That’s something that I don’t think will be an issue with the incoming directors.”

Gonigam: “I think in the past the model for how we deal with advocacy has been, in some ways, a little bit top-down … That process works well, and it’s not like it doesn’t provide opportunities for representatives to bring things into the organization, but I don’t think there’s any reason that we have to restrict ourselves to that. I would be much happier, and I think the organization would be much more engaged … if we have tried to focus more on a bottom-up approach. If we tried to more accurately capture what is going on at the individual units and individual programs, and then bring those concerns up. Even if it’s something where it doesn’t work with people bringing things up, having that better connection with individual programs and individual units at the bottom level will improve our ability to know when something is happening.”

How would you implement the bottom-up approach rather than top-down?

Gonigam: “Part of the bottom-up approach is interacting with [graduate student groups] and forming relationships with them. And when I say that, I really do mean real and I going and chatting with the presidents of those groups, or going into their meetings, or members of our executive committees going to their meetings and having an opportunity for them to directly speak with us, to learn about us and to have a direct line into the governance process. I don’t know if that’ll be enough — I don’t know if just giving people a voice will be enough, but I know that it hasn’t been done in the past so that’s a good first step.”

Are there any initiatives on behalf of graduate students that you plan to advocate for right away?

Swanson: “So, currently we’re working on the provost’s task force on advising in graduate education.”

Gonigam: “Graduate students lie in a really weird area — we’re part employee, part student. The way that ends up playing out is we’re students when it’s convenient for the University and we’re employees when it’s convenient for the University … That’s something that I think is tough to realize about graduate education — how different it is than undergraduate education and how, as a result, graduate students are a significantly, I don’t want to say a significantly more vulnerable population, but I think I’m fair in saying that. Graduate students are the largest employee class across the University of Minnesota system. So, the provost initiative on advising in graduate education is an attempt to have a conversation at the university level about ways in which policy can be developed and applied and ways in which we can change the environment in higher education, or at the very least at the [University] around graduate advising and around graduate education, to make sure that graduate students are treated fairly. And to make sure that we’re treated with the same deference and respect that employees and faculty are … The big thing with the initiative is the adviser has a tremendous amount of power, and our weird status between student and employee means there are not a lot of safeguards for us, academically or as employees. That’s one of, if not the big initiative, for the next year.”

This interview has been lightly edited for clarity and length.