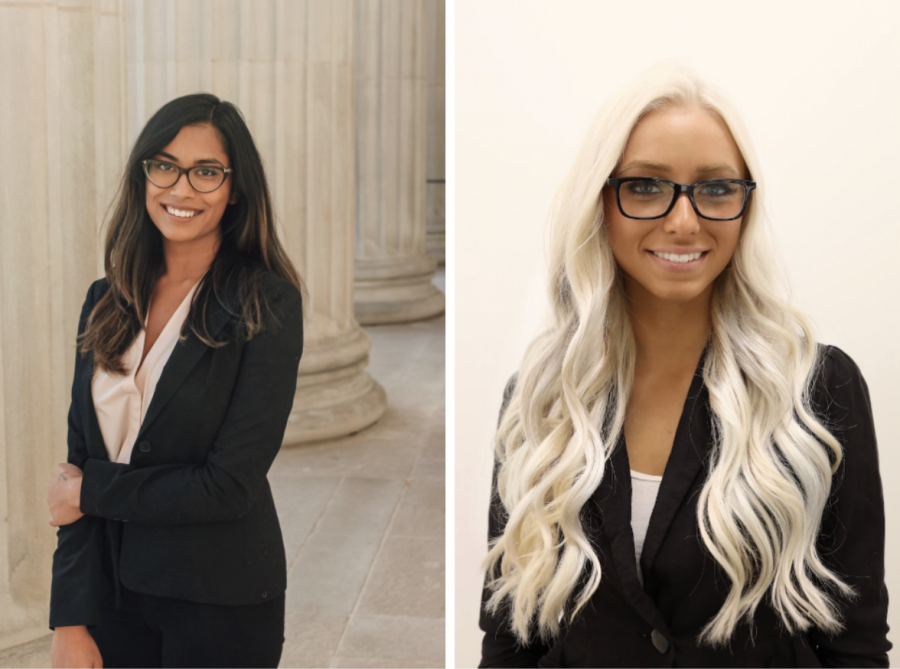 In June, the Minnesota Daily talked with the new Professional Student Government (PSG) President U.J. Bhowmik and Vice President Victoria Anderson about their goals and priorities for their term.

Bhowmik is entering her second year as a Juris Doctor candidate in the University of Minnesota Law School, and Anderson is enrolled in two master’s programs in the School of Public Health — the master’s of public health and master’s of healthcare administration.

How do you feel about being elected as PSG’s president and vice president?

Bhowmik: “First, we’re so excited and so honored that we were elected. I know there were people running who then dropped out prior to the election so we were the only people on the ballot, but it’s still really cool.”

Anderson: “I think what we’re most looking forward to is hearing the student body’s needs and how we can assist with them. Also, it’ll be nice since U.J. and I are in different programs, we can have an interprofessional background for president and vice president since we vary between three different programs, so we have a little diversity there.”

What are your goals for the upcoming year?

Bhowmik: “I want to have more collaboration with [the Minnesota Student Association (MSA)] and [the Council of Graduate Students (COGS)]. I know we share a space with them at the [University] but, when I was in MSA I remember I literally didn’t know what PSG was. We’re so often overlooked because we’re a smaller community. I’m really excited to do more stuff in collaboration with [MSA and COGS], because together our voices seem to be more amplified. There’s a lot of full-University issues that impact professional students as well that we don’t really get as much of a say in because MSA especially is pretty loud with what they need. But, our needs sometimes differ.”

Anderson: “I think that’s a really good question because we’re actually going to be in person this year so it’ll be a little different for everyone to come to school. Mostly just to be involved with the students and the community at the [University]. Seeing what they need and how to address it by rolling out certain resources and policies that they have in mind, from what they need, so we can basically just listen to the community in that regard.”

What are some of your hopes for PSG as an organization this fall?

Bhowmik: “For me, at least internally with PSG, I wanted to kind of echo that sense of community as an organization. I want everyone to feel like they are doing something that matters. And in the past I feel like people have this dissociation, especially with Zoom PSG, it was really difficult to get people to want to be there — and [PSG leadership] did a great job. But, internally I think we want to make everyone feel as comfortable and be as flexible as possible. So, I’m definitely thinking if we do have in-person meetings, we will be doing a hybrid version, so people can attend from home, if possible, and that way we will have the maximum attendance, and everyone can get the information they deserve to be able to hear.”

Anderson: “I think the main one for me is to be community-oriented for the students, just to ensure that they have access to the proper health services that they could need, potentially. And then also assisting with mental health, specifically while being back on campus for the school year since the pandemic has started.”

What impact do you hope to have on PSG and the University after your terms end?

Bhowmik: “Just kind of creating a sustainable inter-governmental structure, and being able to have more openness of communication with COGS and MSA. Because we’re all here for similar reasons, even if our priorities may be different at times. I want to create something that lasts and a culture of that to keep going forward.”

Anderson: “Definitely listening to the students because I think that’s how we tie down the information. And just hoping to have a really positive long-term impact on PSG and the University by ensuring that we understand how the student body feels. Just kind of teaching them that we can have different people from different programs on the board; U.J. and I knew each other beforehand, but just encouraging that along the way is I think important, too.”

Are there any initiatives that you feel strongly the student body knows your stance on?

Bhowmik: “An example I love to give is that three people in my specific class of 50 people have had children in the last year as we’ve been on Zoom. And them being on Zoom has actually made it more accessible for them to be able to attend classes in times they may not have been able to. The childcare facilities at the [University], it’s great that we have that, but I think we need more of that because it needs to be affordable, especially for students. And I want to create a way that we can keep the hybrid format for students. I think it’s just having that kind of exemption, now that we know it’s so possible to just record a class, why shouldn’t we have that option for all of our students? It’s not a unique issue for professional schools. That’s kind of my biggest thing — we’ve learned so much, we shouldn’t just go back without bringing what we learned in the last year and a half.”

Anderson: “We take mental health very seriously. I think that’s a big one during this time, for sure. And ensuring that [students] have access [to mental health resources] through Zoom and not only in person is really important because of health insurance and access, it’s hard for them to be able to get that from the [University] online versus in-person. Like I was saying, it is important to me.”

Is there anything else you would like to add?

Bhowmik: “Just that everyone can feel comfortable reaching out to us directly on our personal emails or even the professional email. I am a big fan of actually interacting with people. I am very happy to go talk to someone in person if they don’t feel comfortable writing out a concern. I’m also going to make sure we have anonymous forms available.”

This interview has been lightly edited for length and clarity.