Jacob Bechtold, a third-year student at the University, started the club in early 2020. 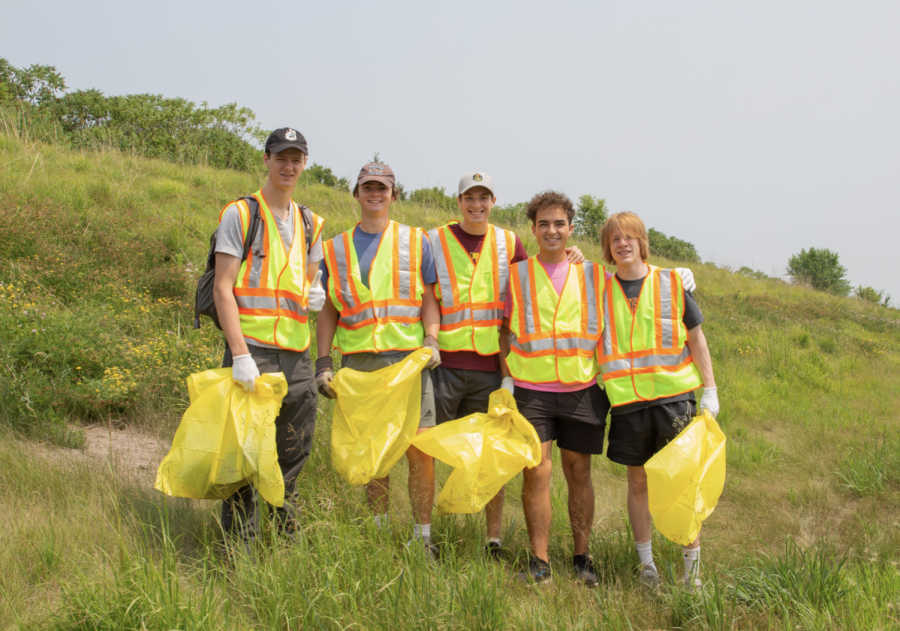 Members of 365Green pose for a portrait along highway 12 in Chaska, Minn. on July 11.

It was an overcast day in late April, one day before Earth Day 2021, when Kendra Kloth put on joggers and a fleece jacket and stepped out of her residence hall, ready to pick up trash.

Armed with reusable gloves, trash bags and plenty of layers to protect them from the chilly spring air, Kloth and her team of nine marched into the Como neighborhood near the University of Minnesota campus and started stuffing their bags full with discarded wrappers, bottles and other garbage littering the streets.

Scattered around the Dinkytown and Marcy-Holmes neighborhoods were 35 other students, also picking up trash as part of a campus-wide trash cleanup in honor of Earth Week.

“Our main goal is to provide students with education or action through social media, political policy impacts and partnerships with local organizations to further education and action for climate change on campus,” Kloth said. “We want to get as many people involved in trying to understand what sustainability is and how sustainability can better our climate change fight.”

Bechtold is an incoming third-year student at the University studying industrial and systems engineering. He said that at the onset of the pandemic, he observed that many sustainability issues were “taking a backseat” to the virus and decided to take action from his home.

“I just reached out to a bunch of my friends from high school and college and we just met on Zoom a couple times and came up with the idea,” Bechtold said.

Bechtold’s dad came up with the name, a nod to the club’s dedication to sustainability.

“The idea behind it is that we try to promote sustainability and make the world a more “green” place, 365 days a year,” Bechtold said in an email.

The Earth’s temperature has risen by about two degrees Fahrenheit since the late 19th century — largely due to human activity. Due to increased carbon emissions around the globe, sea levels are rising, glaciers are shrinking and the ocean is warming up, according to NASA.

365Green is one of more than 30 student groups at the University that seek to address some aspect of sustainability and environmental responsibility.

Though 98% of 365Green’s members are enrolled at the University, the pandemic and virtual platforms like Zoom made it possible for the group to include members from other schools like the University of Wisconsin-Madison and Drake University, Bechtold said.

Staying green during the pandemic

While many clubs have stopped meeting regularly over the summer, 365Green continues to hold events and biweekly meetings.

In June, the group went on an evening hike to Hidden Falls Park in St. Paul. On July 1, members gathered for a vegetarian grill-out and on Sunday, the club picked up trash along their adopted portion of Highway 212 in Chaska.

“It helps that a lot of us have just become pretty good friends,” Bechtold said. “With COVID, sometimes 365Green was one of the only social things I did that week. So we’re all pretty tight now. Everybody wants to go do fun things together.”

Because the club began mid-pandemic, in-person events and meetings were few and far between over the past year. However, Bechtold said that club members have been engaged and ready to learn, even virtually.

Over Zoom, 365Green hosted a variety of guest speakers, such as professors from the University and leaders from environmental activism groups in the Twin Cities. Other meetings were “informational action meetings” where one member of the group would talk about a local or global issue affecting the environment, and then the members would break out into groups to discuss.

Luisa Nothaft, one of 365Green’s executive board members, lives in Brazil. Nothaft used one informational action meeting to conduct a presentation about the destruction of the Amazon rainforest.

“The entire meeting was just a conversation about the Amazon rainforest, the destruction and how local politicians are reacting to it,” Kloth said. “I feel like I learned a new thing about an issue every meeting, which is super exciting.”

Along with learning about the environment, the club has also contributed to local environmental activism around the Twin Cities. Last summer and fall, Bechtold and his team worked with the Bloomington Sustainability Commission to create a declaration defining climate change as a crisis in the city.

In late March, members of the club organized a protest outside of a Chase Bank building on campus. The national bank is a financial supporter of the Line 3 oil pipeline project.

The Line 3 pipeline project is a proposed expansion to an existing tar sands pipeline that runs from Alberta, Canada to Superior, Wisconsin. Activists are protesting the expansion of the pipeline, citing environmental concerns and a violation of the treaty rights of the Anishinaabe people.

“I feel like that had a really powerful impact on my view of the club because we were able to socially distance, but get together and promote a cause,” Kloth said. “I’m excited to do a lot more of that next year.”

The club had its first set of elections last April. Kloth was elected as the new partnerships lead  — a position designed to work with local organizations to promote their businesses while advising them on how to implement more sustainable practices.

The club’s Cut Out Cutlery campaign — a campaign encouraging businesses to stop using or giving out plastic utensils to customers — is taking off this upcoming school year. This past year, the team had conversations with Coffman Union about their compostable cutlery system.

“We are going to try to connect with restaurants in Dinkytown and move them towards more sustainability practices, whether it’s offering a couple more plant-based options for their menu, or trying to avoid [disposable cutlery],” Bechtold said.

Next year, Bechtold said the club will continue to do campus clean-ups, and he hopes to start a “sustainability olympics” with the other environmental activism groups on campus.

The club also plans to create a community garden in Van Cleve Park near campus, an idea spearheaded by Evan Redepenning, the vice president of 365Green.

“Starting the conversation and getting people involved and to know about [sustainability] is the first step in making change,” Kloth said. “I’m still having conversations with my parents and my friends about these things, like, every week. That way, people are more aware, because it is such a big issue.”