The celebration will take place on Saturday, July 17, and independent record stores around the Twin Cities are preparing for a day filled with excited customers and exclusive music. 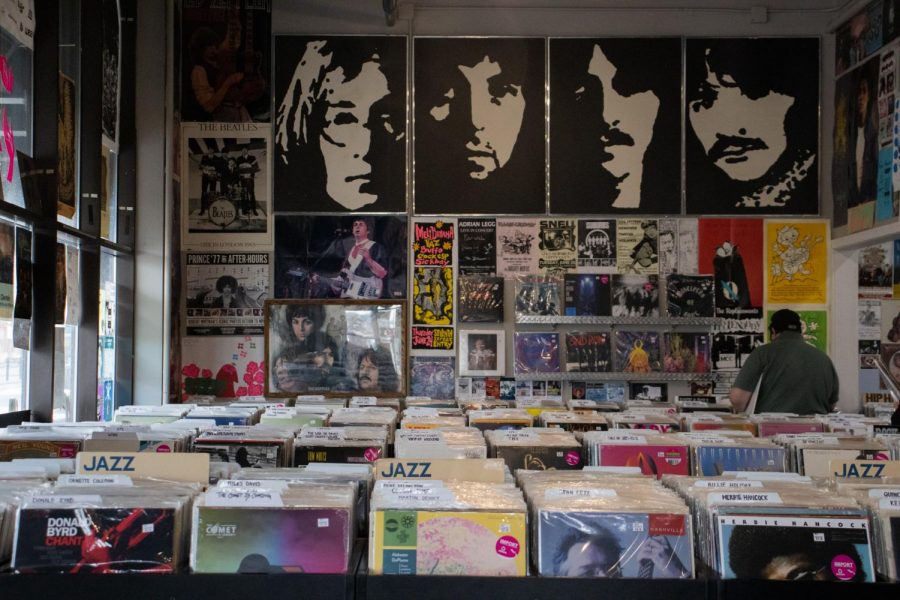 Shoppers search through records at Agharta Records in St. Paul, Minn. on July 14, 2021. Agharta Records will be opening early for this year's Record Store Day, a day to celebrate and support local record stores.

Clear your weekend plans, audiophiles! A big day for vinyl collectors and connoisseurs is just around the corner.

Record Store Day (RSD) 2021 will be observed by music fans on July 17. The day recognizes the importance of independent record stores, celebrating the culture and sense of community between patrons, staff and artists alike. With a slew of exclusive RSD titles coming out, participating record stores around the Twin Cities are gearing up for one of their busiest days of the year.

After it was first celebrated in 2008, RSD has since grown to include participating stores around the world. A notable part of the RSD celebration is the release of new records that can’t be found anywhere else; RSD Drops include specially created titles that are released only to indie record stores.

Due to COVID-19, this year’s drops were separated into two dates: June 12 and July 17. According to the RSD website, this was done as an effort to generate revenue for the participating stores “in the most fiscally and socially responsible way,” as well as to provide some flexibility to vinyl distribution companies during this time.

The list of drops coming on July 17 is extensive. It features exclusive works from big names in modern music, like Denzel Curry and Future, alongside musical icons from decades past, like Aretha Franklin and the Rolling Stones.

Over 30 record stores across Minnesota are participating in RSD 2021, and a handful of them are located right here in the Twin Cities.

Located on University Avenue in St. Paul, Agharta Records is easily accessible via the Metro Green Line – perfect for all the University of Minnesota music enthusiasts.

Dylan Adams, the store’s owner, said that in the past, RSD has brought a decent-sized crowd to Agharta.

“Usually there’s a nice big line. What’s really cool is people are really determined to get certain things,” Adams said. “For the most part, I feel like if people wait in line, they will get what they want.”

Adams said Agharta will be opening early on RSD, and he encourages people to come together and support local independent record stores.

“This is just a celebration of music, records and record stores,” he said. “I want everyone to go to a record store on Record Store Day, whether it’s mine or someone else’s. We’re all in this together, and we’re all investing a lot for this day.”

Whether you have a growing collection of early vinyls or you’re looking for the hottest new albums, Hymie’s on East Lake Street is another spot to check out on RSD.

Owner Adam Taylor said the shop will be offering a mix of exclusive RSD drops and rare collectibles he’s been holding on to. RSD at Hymie’s will kick off at 8 a.m., giving customers a few extra hours to browse the collection.

Taylor mentioned that RSD brings in a lot of business and support for brick-and-mortar record stores. “Last Record Store Day was about two months of sales in 12 hours,” he said. “For a lot of people, it might be one of the few times they actually go out to a record store, believe it or not.”

He said that RSD is not only important in terms of business, but also in the fact that it works to preserve and recognize the history of vinyl.

“It’s a recognition that vinyl is here. It never really went away … but I do think it’s validation that the format is quite possibly the best format for recorded music.”

With its bright orange exterior, Roadrunner Records on Nicollet Avenue is hard to miss. This is especially true on RSD, when a line out the door can be found as early as the sun rises.

“They line up for the exclusives right at 5 a.m.,” said Keith Patterson, assistant manager at Roadrunner.

Patterson said the store will have at least 100 exclusive titles for sale, as well as new items from their own collection.

Davin Odegaard, a Roadrunner sales clerk, said that buying from a local record store provides a completely different experience than shopping for vinyl online. He said that not only can you pick up and look at the physical copies, but you can also converse with other patrons or record store staff, both of which can’t be said about ordering from Amazon.

“It’s a different way of going on your musical journey,” Odegaard said.

A full list of the participating record stores in Minnesota can be found on the Record Store Day website.