The student recipients said the scholarship gave them hope for future change that will better acknowledge racial injustices at the University. 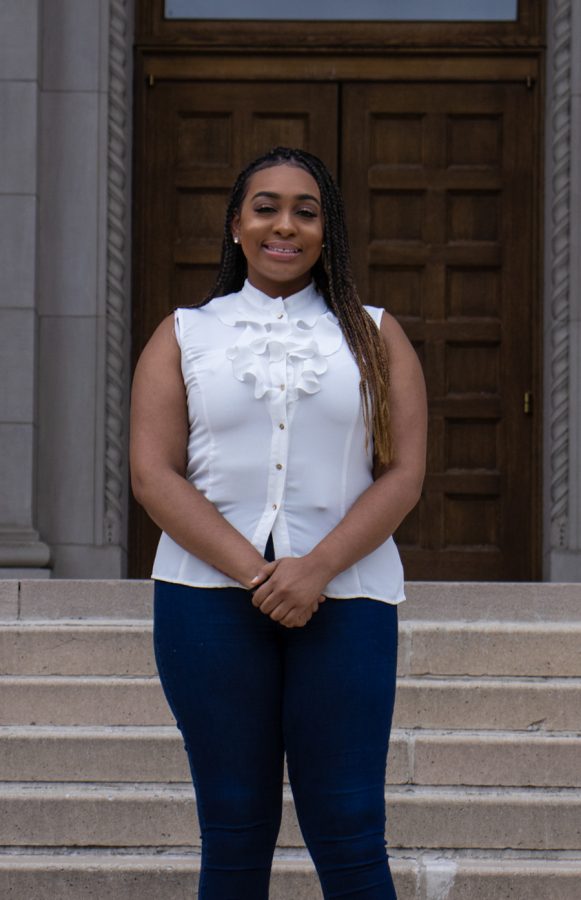 Rayna Taylor poses for a portrait on July 7 in Minneapolis, Minn. Taylor graduated from the University of Minnesota in May with a degree in Technical Writing and Communications.

Recipients of the recently established scholarship in honor of George Floyd shared their stories and experiences with racial injustice, and hopes for change at the University of Minnesota.

Following the murder of George Floyd by former Minneapolis police officer Derek Chauvin last year and the subsequent protests from countless groups across the University, leaders established a systemwide scholarship in honor of Floyd’s life and legacy. The University of Minnesota scholarship in honor of George Floyd is intended to “support underrepresented students, including the Black or African American leaders of tomorrow.”

The two scholarship recipients, Rayna Taylor and Krysjahn Johnson, shared the stories and past experiences with the Minnesota Daily that are motivating them to take action and advocate for racial justice.

“Everybody wants to feel like they’re heard, or like their life matters, their story matters,” Johnson said. “I think especially to people who maybe haven’t had the opportunity to share a story or to ever have someone listen to them — I think this [scholarship] is a great opportunity for somebody who feels like ‘nobody understands my experience’.”

“[The scholarship] is taking the opportunity to support students to elect our commitment to addressing these issues to invest in the future of the students we have awarded,” Goh said.

After facing criticism regarding the criteria of the scholarship last year, the University made the award open to any full-time, undergraduate degree-seeking student, including those with financial need and those who have been victims of police violence.

There were two scholarships awarded this year, one to a Twin Cities student and the other to a student from a system campus, although the committee hopes to expand the scholarship in the future, McMaster said.

“We’re hoping we’ll continue to build the resources and endowment for the scholarship. As we move forward, the long-term goal is to increase the number of scholarships given out each year and extend the scholarship to more than just one year so students can more fully commit to the work they’re trying to do without financial burden at the University,” McMaster said.

During the time following George Floyd’s murder, University student Rayna Taylor said she was moved by the Recall Mike Freeman movement, which was based around bringing more progressive leaders into the Hennepin County Attorney’s Office. After directly hearing about their mission on the news, Taylor emailed the organization with a project proposal that involved giving a voice to wrongfully incarcerated people.

Recall Mike Freeman focuses on gathering experiences from people in the community to learn about negative experiences they had with the Hennepin County prosecuting office. It was Taylor’s idea to include the voices and perspectives of men and women that are currently incarcerated in Minnesota prisons.

This idea came from a previous marketing internship, where Taylor entered different facilities and shops where incarcerated citizens worked, and helped them become more marketable for the job market when they finished serving time in jail or prison. She said she felt like it was a different world and would feel anxious before entering the facilities.

“I just think it’s just me and being a Black woman and I’m going in there knowing my community is disproportionately incarcerated, and over prosecuted,” Taylor said.

Taylor said in the past, she has not received many scholarships and has relied on student loans to fund her education at the University. She said this scholarship will help support her as she continues her project spreading the voices of those incarcerated as part of the Recall Mike Freeman movement.

“Just knowing that we have the support and willingness of others in our community to help us to strive for change. I think this scholarship will really help to foster and encourage the future community leaders and pioneers of social justice,” Taylor said.

Krysjahn Johnson will be a fourth-year student this fall at the University of Minnesota-Rochester campus.
Johnson discussed a time in grade school when there was a career fair. She said she was very thrilled to be attending and learning about doctors, nurses and other careers of interest.

Johnson said a teacher told her she could not do any of those professions because she’d be better suited to cosmetology. Ultimately, teachers at the school prevented her from taking part in the career fair, while her peers were still able to attend.

“I think they pulled me back because my teacher had a misconception that all Black people want to do is hair, or music or something that really fits into the stereotypes.” Johnson said. “I discussed in the application question how that made me feel and that I didn’t understand it.”

She said that experience went against what she knew growing up, because she never limited herself to anything.

“That’s something that I had to learn growing up. I have to push myself because not everybody’s going to believe in me like I believe in me,” Johnson said.

Johnson said that receiving the scholarship made her story feel valid and her experiences feel heard. She also said she feels the scholarship has the potential to make others feel the same way..

“The fact that somebody was like, ‘I hear you and that’s a good story,’” Johnson said. “It just kind of gave me some confidence within myself and what I have to share with people.”