In their first game without running back Mohamed Ibrahim, sophomore Trey Potts stepped up in his place. 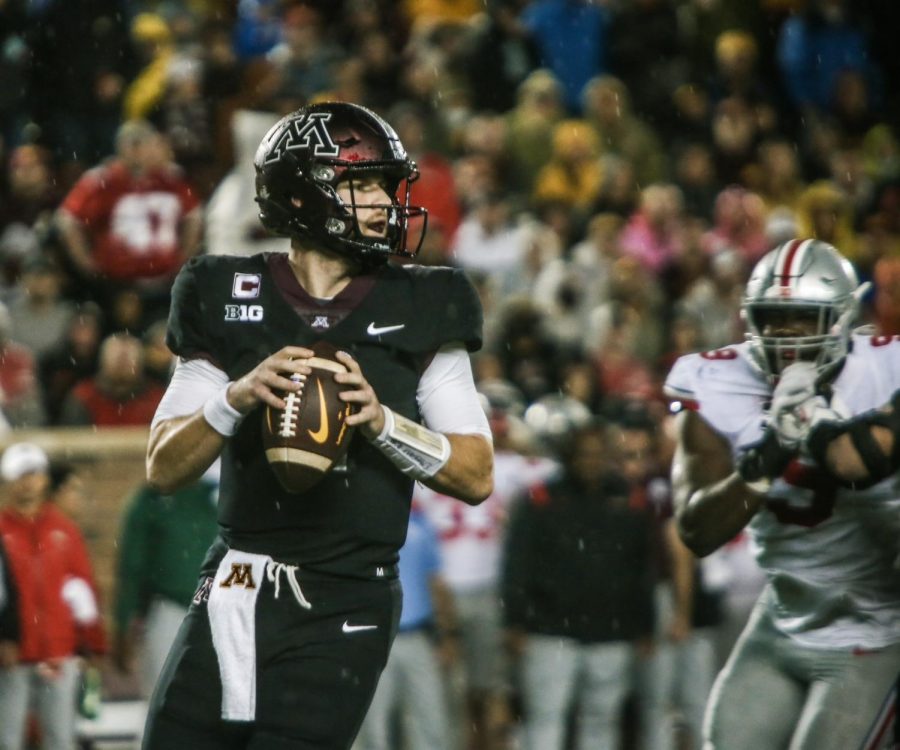 Settling in the pocket, quarterback Tanner Morgan looks to pass the ball during the Minnesota football game against Ohio State University, Thursday, Sept. 2. The Gophers lost to the Buckeyes, 45-31.

Miami-Ohio returned starting quarterback Brett Gabbert and he fared better than his backup AJ Mayer in the previous week. The Gophers defense was too much for the Redhawks offense early but Miami got into their groove in the second half, nearly coming back from an 18-point halftime deficit to beat Minnesota.

On the next Gophers possession, Tanner Morgan threw a 25-yard dart to Dylan Wright running a post route for a score to increase their lead to 11 over the RedHawks, pulling ahead 14-3.

Daniel Jackson concluded the drive with a six-yard touchdown catch in the left flat to put Minnesota ahead 21-3 at the half.

After starting the second half with a sack on Morgan, Miami made adjustments on the field, bringing in Backup quarterback AJ Mayer, who threw a 26-yard pass to Jack Sorenson and capped off the drive by rushing for a 1-yard touchdown.

The Gophers struggled to create cohesive plays in the third quarter. Potts barely ran for a two-yard first down on a 3rd and 2 and on the next set of downs Wright tripped on turf in the middle of a slant route that would’ve been a sure-fire first down. The Gophers punted for the second straight possession.

Head Coach PJ Fleck attributed dropped balls as the main reason why the Gophers were so sluggish offensively in the third quarter.

The Redhawks offense continued to confuse the Gophers on the next drive. The drive ended with a Redhawks 45-yard field goal. Gophers 21-13.

After a second Minnesota 3-and-out in the third quarter with Miami-Ohio driving in Minnesota territory the 3rd quarter concluded.

In the 4th, Miami scored on a 23-yard strike by Gabbert to Sorenson for a touchdown to make the game 21-19. The RedHawks did not choose to attempt a two-point conversion due to a 5-yard sideline warning penalty, and settled for an extra point, trailing the Gophers just 21-20.

The Gophers’ next possession was nothing like anything seen in the third quarter. The drive featured five straight runs by Potts ending in a touchdown after freshman Mar’Keise “Bucky” Irving ran for a 43-yard kick return to make the game 28-20.

Gabbert next made his first major mishap of the game the next possession throwing a pass that was intercepted by safety Tyler Nubin.

The Gophers turned that turnover into points with a 53-yard kick by Matthew Trickett. This was the first 50+ yard successful kick of Trickett’s career which extended the Gophers lead to 11.

When Trickett walked on the field to attempt the field goal he said he was thinking “God’s got me,” Trickett said. “Trust my training, trust the guys around me and trust the guys up front to not let anybody through.”

Miami-Ohio responded by scoring directly after a 4th down roughing the passer call on Rashad Cheney Jr. that reversed a turnover on downs. An unsuccessful two-point conversion made the game 31-26, the eventual final score thanks Potts, who bulldozed his way for key first downs to prevent another Redhawks touchdown.

Fleck described Pott’s performance as ‘gutsy’ post game. “You don’t know how someone is going to react in that type of situation in that type of game”, Fleck said. “You know what Mo [Ibrahim]is going to do but Mo’s done that for years. Now Trey has shown what he can do.”

Potts didn’t expect to get such a ‘bell cow’ type of role in the backfield. He said, “when your number is called you have to go out and make a play”. Potts finished with 34 carries, 178 yards, 2 TD, and 5.2 yards per carry.

Minnesota will face Colorado in their first road game on Saturday, Sept. 18 at 12 p.m. CST.

Correction: A previous version of this story misstated the quarter in which Irving ran for a 43-yard kick return; it was in the fourth quarter.