UMN Against Frats, a new student group, led a protest to show solidarity with protesters at the University of Nebraska-Lincoln. 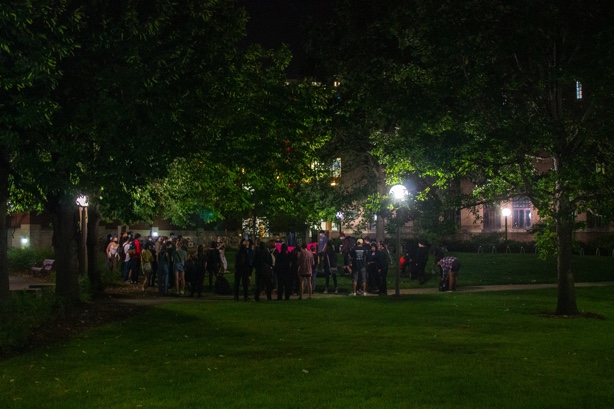 Students gather outside Cooke Hall for a "UMN against Frats" protest on Friday, Sept. 10.

Editor’s note: This article discusses sexual assault. If you or anyone you know has experienced sexual assault, the Aurora Center’s 24-hour helpline can be reached at (612) 626-9111.

Four years ago, a group of student protesters marched down University Avenue, also known as “frat row,” to denounce rape culture and demand the University of Minnesota take action to stop sexual assault after a string of sexual assault reports occurred across University fraternities.

On Sept. 10, dozens of University students continued this legacy with a march starting from Cooke Hall and ending at the Phi Gamma Delta (FIJI) house, led by recently formed student group UMN Against Frats.

The FIJI house was chosen as the end location of Friday’s protest to show solidarity with the protests at the University of Nebraska-Lincoln (UNL) after a sexual assault was reported at its FIJI chapter.

With chants of “All frats are FIJI,” protesters made their message clear: they stand in solidarity with the protesters at UNL and victims of sexual assault at the University of Minnesota.

“I think what’s happening at the University of Nebraska-Lincoln is giving different schools momentum to continue this work,” said a representative of Abolish Greek Life UMN, who asked to remain anonymous due to safety reasons. “Unfortunately, this isn’t the first time that sexual violence has happened on campuses, but I think now people are tuning [in] especially with what’s happening at FIJI.”

Abolish Greek Life UMN is another recently formed student group that uses their Instagram profile to post stories written by students about their experiences with two Greek life organizations, the Interfraternity and Panhellenic Councils. Many of these stories depict sexual assault at fraternity houses and experiences that caused students to drop out of greek life.

“What we hope to do by posting victim-survivor stories is just [to show] solidarity,” the Abolish Greek Life representative said. “Some of the members of the group did experience sexual violence on campus and didn’t feel like they had the outlet to talk about their stories and I think that’s so true for so many other victim-survivors.”

Advocacy in the Greater Minneapolis Community

Like Abolish Greek Life UMN, other groups in the Minneapolis community are working to elevate the voices of victim-survivors. One of these groups is called Break the Silence.

Anishaa Kamesh, a board member of Break the Silence, said the organization is a “grassroots, survivor-led organization that works to support survivors and dismantle rape culture through a trauma-informed and victim-centered approach.”

In the past, Break the Silence joined conversations surrounding sexual violence on campus. In 2017, they organized a non-violent protest in response to sexual assault allegations against 10 University football players,

“We have aligned ourselves with survivors in the community in their fights for justice and accountability through nonviolent demonstrations,” Kamesh said.

Aside from their direct-action work, Break the Silence has fought for four years for legislative change to eliminate barriers for victim-survivors. They recently helped pass a bill in the Minnesota legislature ending the statue of limitation for sexual assault cases. This bill went into effect on Wednesday.

Another group on campus, the Aurora Center, works to provide free, confidential and accessible resources to student and staff victim-survivors. Housed in Appleby Hall, the Aurora Center advocates for victim-survivors at the University of Minnesota and Augsburg University in the legal system, academic settings, through medical examinations, law enforcement and in finding safe housing.

“Our mission is to serve all student survivors and concerned people regarding sexual assault, relationship violence, stalking and sexual harassment at the University of Minnesota-Twin Cities, as well as Augsburg University,” said Katie Eichele, director of the Aurora Center.

“I think it’s important that [victim-survivors] have the ability to choose, following what has taken place because a survivor doesn’t have a choice with what they experience,” Grivna said. “Being able to create that choice and autonomy is really important and what we prioritize.”

The Aurora Center staff members are dedicated to supporting victim-survivors’ decisions and providing the right services to address their wants and needs, Grivna said.

“At the end of the day, we just want the survivor to feel supported,” Grivna said. “There’s places and people they can go to for support, to be heard, and engage in what a healing journey looks like for them.”

While the services and resources at the Aurora Center on campus are available as free, confidential support for victim-survivors, the first-ever national memorial to honor victims and survivors stands in Boom Island Park.

This project, started by Break the Silence, is meant to create a safe space for victim-survivors in the Minneapolis community to heal and reflect, according to Kamesh.

The recent student-led protest, along with advocacy efforts led by groups like Break the Silence and the Aurora Center, are just some of the recent advocacy efforts at the University and greater Minneapolis community that provide safety and healing to victim-surivors, while striving to end the stigma of speaking out against sexual violence.

However, according to the representative from Abolish Greek Life UMN, there is still a long road ahead in the fight to end rape culture and the silencing of victim-survivors rooted in fraternities — and in society as a whole.

“It’s going to be a long battle and I hope it continues,” said the representative from Abolish Greek Life UMN. “I’m hopeful because I’m seeing a whole bunch of other people getting involved, and I think there needs to be a long-term solution, just because it shouldn’t fall on the shoulders of the students to do this work.”