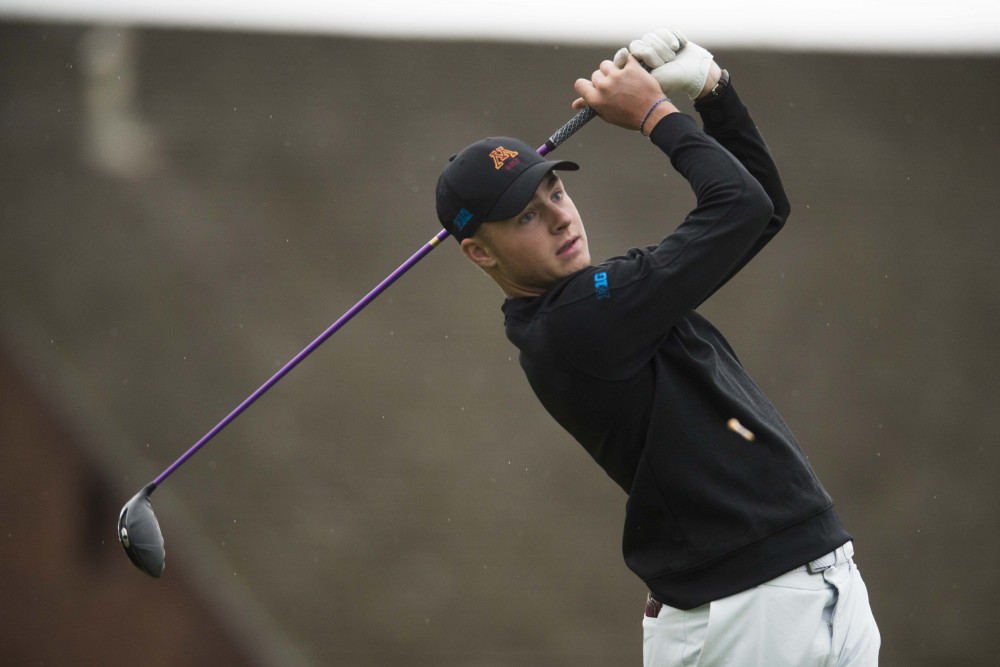 Lincoln Johnson takes a stroke on the first day of the Gopher Invitational at the 2019 Windsong Farm Golf Club in Independence, Minn. on Sunday, Sept. 9. 2019

As the Gophers men’s golf team entered the Rich Harvest Farms Intercollegiate this past weekend, they looked to rebound following a sluggish start to the year. While the two preceding tournaments ended in some disappointment, head coach Justin Smith was optimistic that the hard work was there, and the results would soon follow.

While the team placed in a tie for eighth, there were some bright spots throughout the weekend, such as sophomore Ben Warian, who finished tied for 18th, and shined on the last day, shooting a 6-under 66.

“We’ve got a great group of competitors that have really high standards, and we practice to those and play to those every day,” said Coach Smith when asked about his view of how the season has gone so far.

While their finishes have not yielded top-of-the-leaderboard results, Smith has trust in the process, as he emphasized the youthfulness of his team.

“We have a lot of talent, so we just have to keep putting them out there…putting them in the biggest moments we can and letting them grow.” said Smith.

The struggles that have hindered high finishes for the Gophers have primarily shown up on the final day of competition. Smith stressed how difficult it is to prepare for these pressure-packed shots when the stakes are high.

“We’re trying to get them in those settings that elevate the heart rate, and get them feeling those emotions,…cause then you’re going to be ready for anything that comes your way,” Smith explained.

However, duplicating such heart-racing scenarios is tricky. Smith described that it is almost impossible to replicate the pressure and a razor-thin margin of error that goes into golf shots down the stretch of 54 hole tournaments.

Senior Lincoln Johnson did not let those final-round struggles affect his last round of the weekend. Johnson shot a 71, which featured a three birdie back-nine, posting his low score of the tournament.

Regardless of the results to this point, there is reason for hope and optimism within the program. Fresh faces are gaining experience every weekend, and with that, the hope is lower scores and higher finishes.

“We just want to be in contention to win on the back nine, you can do a lot of great things, but sometimes a team is just a little bit better,…”

Smith most definitely has aspirations for top finishes this season, but he is focused on how his team responds to the adversity they have faced on the course.

Correction: A previous version of this story misstated Minnesota’s next competition date. They will play next in the Purdue Fall Invitational on Monday, Oct. 11 and Tuesday, Oct. 12, in West Lafayette, Ind.