Q&A: the anonymous face behind “goldysjockstrap”

The popular Instagram account’s creator chatted with A&E about her niche content, why she chooses to remain anonymous and how she quickly became immersed in campus culture. 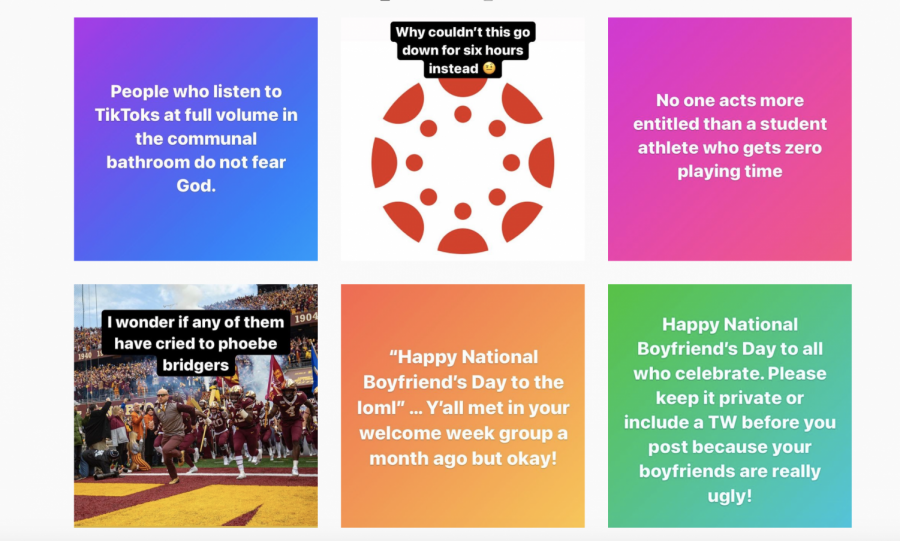 The Instagram account “goldysjockstrap” has quickly become a prominent name in campus culture — it has over 2,500 followers, to most of whom the owner’s identity remains unknown. Using the text post meme structure that has come to dominate our timelines, the page provides a creative and humorous glimpse into niche aspects of the University experience that you won’t hear about on a campus tour. A&E spoke with the student behind the account about her anonymity, the impact she’s making, her campus hot takes and more.

What sort of information do you disclose to followers about your identity?

My pronouns are she/her, and I’m a first-year Carlson student planning on majoring in either finance or marketing.

Why do you prefer to keep the account anonymous?

I would like to not have it infringe on my professional career going forward. It’s also really nice to walk around and see my followers in public but they don’t know it’s me, which is a really weird but kind of cool experience.

Do any of your followers know your true identity?

Yeah, it’s probably about like 5% of people that follow me, so it’s quite a big chunk. I started the account back in the beginning of July, and by the time the school year started I had probably told like 30 people that were going to the U. After that, I think it just spread a little bit, but the majority of the followers don’t know who I am. 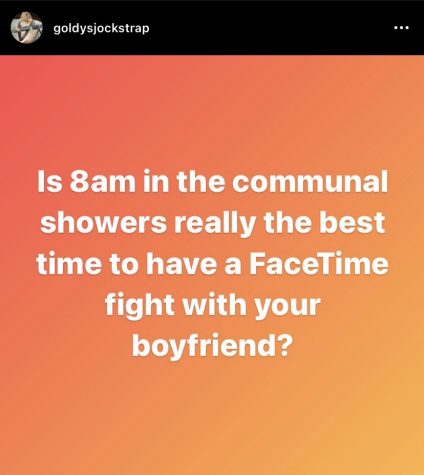 What inspired you to create the account back in July?

There’s this app called Patio, which is sort of like GroupMe but just for the class of 2025. There were jokes going around in there, and I thought it would make for really good content. So, I just started making little Gopher jokes in my notes app. I’ve seen accounts like Barstool Gophers, which is mostly just using other peoples’ content or using meme templates that are really overdone in my eyes. So I was like, okay, I’m gonna make my own.

The account has obviously grown a lot since then, and you have quite the following. What do you think contributed to this success?

A lot of people will repost things on their stories, and then people from the University of Minnesota will see it, engage with it and follow the account. But it’s a lot through word of mouth — there’s been a couple of times in lectures when I’ve heard people talk about the account, or people will text me and say they were walking and heard someone talking about it.

We’re only a month into your first year on campus, yet it seems like you’ve already become familiar with every corner of the University community. How did you do this so quickly?

I got my broad knowledge of everything by living so close to campus. I grew up in the area, so I went to games all the time and had connections at the U. I’d hear people talk about bars and dorms and things like that, and I think that definitely helped. During Welcome Week, we really got immersed in the culture of being at the U, which was helpful in making all of these memes. I also love eavesdropping, so I just listen in on other people’s conversations and make them into memes sometimes. 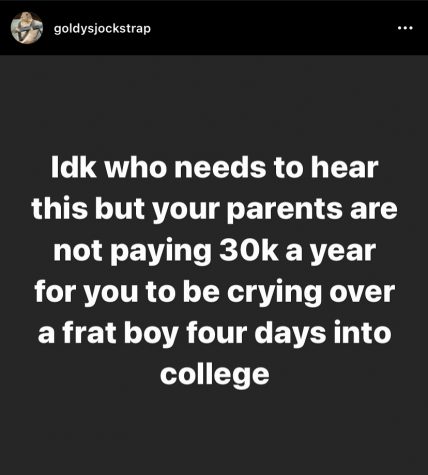 What sort of impact do you think this account is having on its followers?

I feel a little bit like a counselor to some of my followers who are high schoolers, or just an honest voice. When you’re in the college admissions process, there’s not a lot of transparency. You can go on student-led tours, but they’re still employed by the University so they’re not telling you what’s really going on for students. There’s obviously accounts like Barstool, but that’s mostly partying and the athletic scene, and less so what’s happening with freshman and the inner workings of the school.

Is it having any impact on you personally?

For almost all of the friends that I’ve made here so far, I’ve made the connection through having that account. We wouldn’t have built that relationship if it wasn’t for chatting over DMs about posts that I make, or people asking to do a small group meetup. I also always have someone to go to for advice, like I can easily use the account to get to someone in every community at the U and ask them a question. It’s really nice.

You share a ton of campus-related opinions on the account, so what are some of your best campus hot takes?

Superblock as a whole is overrated. My favorite dorms are Sanford and Comstock, and then Middlebrook because I like the people there. When I’m in Superblock, I feel like I’m in Edina. Sometimes I’ll go in Pioneer and I’ll get elitist vibes from people. Another hot take is that psychology majors are as bad as business majors. Business majors get a lot of hate, rightfully so, but I’d say that female psychology majors are the equivalent of male business majors in my eyes. It’s like “womansplaining” versus “mansplaining.”

This interview has been edited for length and clarity.