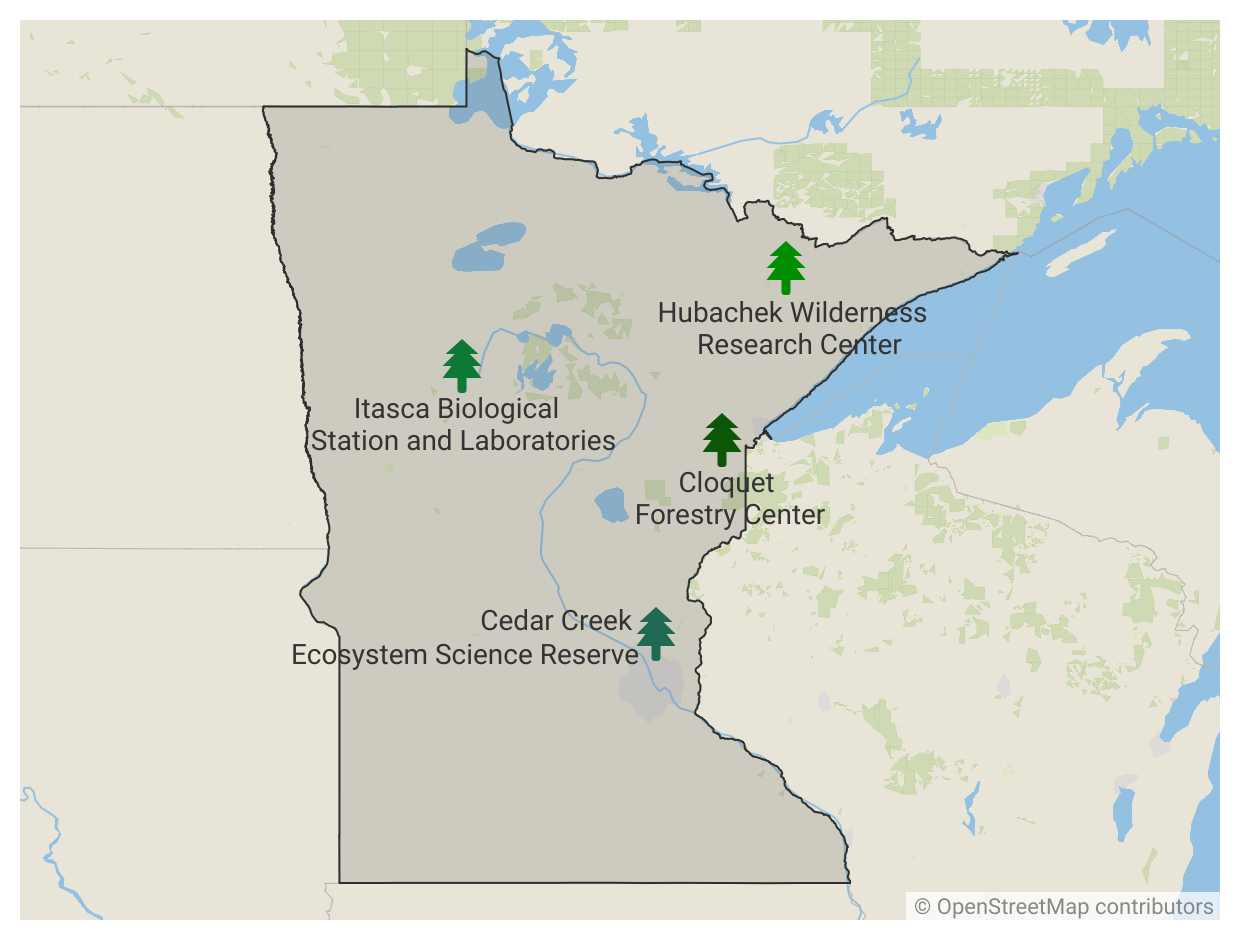 The lands were originally taken by the federal government and granted to the University of Minnesota. Some stations are now trying to build relationships with the surrounding Native Nations.

The University of Minnesota owns 12 research centers throughout the state, all of which are on historic or contemporary Native lands.

Some of the research centers are now trying to establish relationships and collaborative land management practices with surrounding Native nations.

The Morrill Act made it possible in 1862 for states to establish public colleges funded by the sale of federal land grants. States took more than 10 million acres of Tribal lands, according to the National Archives and Records Administration.

The University received land grants through this act from the federal government, largely by lobbying efforts of Regent Henry Sibley. According to a research project by An Garagiola and Audrianna Goodwin through the Towards Recognition and University-Tribal Healing (TRUTH) Project, Sibley was known for his oppression, extraction and extermination of Native culture. In total, Sibley gained 186,791 acres through the dispossession of Indigenous nations.

The Dakota War began one month after the Morrill Act passed. According to Garagiola and Goodwin’s research, University regents oversaw the starvation, rape, murder and exile of many Dakota, Cheyenne and Ho-Chunk people during the war.

According to Land Grab Universities, the University received 94,631 acres of land from the Morrill Act. They paid an inflation-adjusted $77,000 for the land titles and profited $10.6 million. Additionally, all lands provided to the University by federal or state governments become part of the Permanent University Fund, which held a market value of $543 million in 2016.

University spokesperson Jake Ricker said it has been a priority for President Joan Gabel to acknowledge the “painful realities” of the University’s past and work to rebuild and strengthen the relationships between the University and Minnesota’s Indigenous communities.

Although the University did sell a majority of the land to pay for the campuses over time, it has since obtained more land across the state for research purposes.

Cloquet Forestry Center
Federal and state governments alloted the University more than 2,000 acres of land on the Fond du Lac reservation in 1909. After legislation like the Dawes Act of 1887 and the Nelson Act of 1889 made purchasing lands easier, CFC now owns 3,391 acres.

The Dawes Act broke up reservation land into individual land allotments for Native individuals who renounced Tribal affiliation to become American citizens. The remainder of allotments, more than 90 million acres, were sold to non-Native U.S. citizens, according to the National Park Service.

The Nelson Act relocated Anishinaabe tribes in Minnesota to the White Earth Reservation in the northwest and sold the vacated reservation land to European settlers.

“The way that people were duped out of ownership of their land was a colonizer tactic,” Damon Panek, wildland fire program manager and member of the Mississippi Band of White Earth Ojibwe, said.

Panek said due to how the land was taken, the University has an obligation to work with Tribal nations.

“How do we come to terms with how ownership of land today is a result of a morally wrong thing that happened?” Panek said. “One way is just give it back.”

“It was stolen from us, we did not give it up voluntarily,” Northrup said. “This is a great big hole in our heart; it’s a 3,000-acre hole in our reservation.”

Northrup added the Fond du Lac Band is in the process of buying back as much land as possible to make their reservation whole again.

“There is a lot of hunting and gathering we could be doing there that we currently cannot,” Northrup said. “The biggest thing is returning ownership.”

Kyle Gill, forest manager and research coordinator at CFC, said the tribes are within their rights to challenge for their sovereignty even within private, University-owned lands.

Northrup said CFC could still be shared and used as a training service for foresters and wildlife biologists if the land is returned.

“Let’s use it for what it is, an educational ground,” Northrup said. “Not just for the white man, but also for us.”

Panek said not having complete access and management authority to their homelands restricts the opportunities to transmit cultural knowledge.

“If people don’t have, or don’t feel like they have, access to their homeland … you can’t do the things that comprise your identity and culture, it changes who you are,” Panek said.

Gill said whichever way the official land ownership works out, he hopes there is an appreciation for the value of collaboration.

Panek said the fire burning projects at CFC are unique because they show the University recognizes the land belongs to the tribes and it is the land acknowledgment in action.

“We know fire is a cultural keystone, and our hope is that it will create more opportunities for future collaborative efforts like medicine collection,” Gill said. “We want to be seen as an asset to the local community.”

Gill said the treaty rights for hunting, fishing and gathering is the next issue they want to discuss.

“Keeping an open dialogue and creating collaborations that help build trust … are crucial for us as we repair our relationships with Native communities,” Joleen Hadrich, CFANS interim associate dean for research and outreach centers, said in an email to the Minnesota Daily. “We will continue to have open dialogues for future collaborations.”

Although HWRC was gifted to the University, the lands were still taken from Native nations in Ely, the heart of the Boundary Waters Canoe Area Wilderness (BWCA).

The treaty came after an 1848 discovery of copper within Lake Superior’s north shore. Mining companies began pressuring the federal government to relocate the Native communities to open the area for mining.

Gill, who is also forest manager and research coordinator for HWRC, said the family desired a more passive management style, which is the approach they are taking.

“We are trying to mimic our land stewardship of the boundary waters,” Gill said.

Gill also said since the lands are in a more private area, there are few communication efforts with the outside community.

“Up there we are not technically open to public communication, but we recognize we need to do more,” Gill said.

Additionally, Gill said due to HWRC being ceded territory, they are not currently active in collaborative land management with Native communities.

Itasca Biological Station and Laboratories
Itasca Station is located within the Itasca State Park boundaries and the Mississippi headwaters. The Minnesota Department of Natural Resources (DNR) has management authority of the lands and waters surrounding the station, not the University.

One year after the 1854 Land Cession Treaty, Ojibwe bands around the Mississippi headwaters ceded most of their land in north-central Minnesota in the 1855 Treaty of Washington, agreeing to similar terms as the 1854 treaty, according to the Historical Marker Database. This created the Leech Lake and Mille Lacs reservations.

The Minnesota Legislature designated Itasca as Minnesota’s first state park in 1891. The University established a field station at Itasca State Park to train forestry students in 1909.
Itasca Station Director Jonathan Schilling said being within a state park makes it difficult to collaborate with Native nations on land stewardship.

“Since there is no authority for collaboration to occur, our task is instead to focus more on relationship building with the surrounding Native communities,” Schilling said.

Schilling said he wanted to develop more of a relationship with the community since Leech Lake, White Earth and Red Lake reservations are nearby.

One area of engagement has been wild rice camps, which is a community event where wild rice is gathered and prepared, according to Larry Olson, annual rice camp organizer, District 3 Mahnomen county commissioner and citizen of the White Earth Nation.

“Over time, we’ve actually reseeded the lake with [wild] rice. When we first started there wasn’t very much rice out there,” Olson said.

“It’s a long history of relationship building within the Tribal communities that is so intensely important,” Daillinger said.

Schilling said the University has a responsibility to Native communities and needs to acknowledge the long history between the two.

Moving forward, Schilling said he would like to see more Traditional Ecological Knowledge (TEK) integrated into the University curriculum and more collaborative research with Indigenous communities.

“In terms of research growth, it would be nice to develop plans that have equal contribution from all,” Dallinger said.

Olson said he would like to see a relationship with the University continue in the future.

Olson said he would be content “as long as they keep allowing us to do what we’re doing … reseeding the lake and providing other management skills.”

Cedar Creek Ecosystem Science Reserve
Cedar Creek is a nearly 5,000-acre experimental ecological reserve operated by the University in cooperation with the Minnesota Academy of Science.

The land that Cedar Creek resides on is a part of the land that was ceded during the 1855 Treaty of Washington, like Itasca station.

Before the treaty, Native people lived in and traveled through the Cedar Creek area for thousands of years. However, the treaty placed the lands in federal control and much of the area was later sold to the Lake Superior & Mississippi Railroad Company.
In 1942, the Ecosystem Science Reserve was established and the National Park Service designated it a National Natural Landmark in 1975.

Cedar Creek later became one of 11 sites in the U.S. selected by the National Science Foundation for funding of Long Term Ecological Research in 1982.

Caitlin Potter, associate director at Cedar Creek, said the science reserve sits at a historical boundary where an 1825 treaty drew a line on paper separating Dakota lands from Ojibwe lands.

The 1825 treaty, often referred to as the “Prairie du Chien line,” was an agreement between Dakota and Ojibwe leaders to create boundaries to protect themselves from incoming Europeans.

Potter said in the past, there has not been much collaboration between Native tribes and Cedar Creek, but those efforts have recently begun.

Potter said Cedar Creek is currently invested in building relationships with the Tribal nations and has a few collaborations such as educational workshops on topics like water quality, animal tracking and wild rice as well as high school internships.

“Over the course of the summer, the students worked on independent projects that specifically are bringing Native languages and Native perspectives to a new public trail at the reserve,” Potter said.

Fair compensation is one thing Cedar Creek is ensuring they do when they reach out to Native partners and collaborators to not repeat past mistakes, Potter said.

“We’re not asking them to do us a favor and share their knowledge, share their cultural traditions and share their language,” Potter said. “Instead, we ask them what they feel comfortable sharing and how they would like to be compensated.”

Cedar Creek also has a formal Diversity, Equity and Inclusion plan that opens with the land acknowledgment and ways the statement can be seen in action through projects and collaboration.

“That’s a way that we can hold ourselves accountable as well as build some of these other relationships,” Potter said. “It is important to me that Cedar Creek doesn’t solely dictate where we go, that the decisions that we make about the future are ones that are made in conversation with stakeholders, Native and non-Native.”